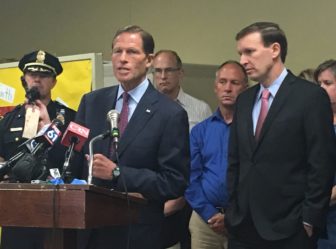 Hours before the public preview of a new elementary school in Newtown to replace the one where a lone gunman killed 26 people nearly four years earlier, Connecticut’s two U.S. senators said Friday action on gun control probably will not come until after the November elections.

At a press conference with weary residents and community activists in Hartford’s North End, U.S. Sens. Richard Blumenthal and Chris Murphy said if Democrats retain control of the White House and take back a majority in the Senate, there will be enough pressure on Republicans in the House to hold a vote.

Blumenthal said there is momentum on the issue coming out of this week’s Democratic National Convention, where gun control received significant attention.

“We’ve been building for three years now,” Murphy said. “We’re going to win this. Anything important – anything worthwhile – is hard.”

“Meaningful change sometimes takes longer than you like,” Murphy added.

Murphy said gun control is already playing a major role in competitive Senate races across the country, including in states like New Hampshire and Nevada.

Several community activists addressed the senators during the press conference, saying that more could be done before the elections take place. Two activists – including Sam Saylor, whose 20-year-old son was killed by gun violence in Hartford four years ago – urged Blumenthal and Murphy to advocate for more federal grants and funding for organizations in the community.

“I hope we don’t have to wait another election for the support,” said Andrew Woods, executive director of Connecticut Communities That Care. “Because that’s another thing that we’re tired of – one more election.”