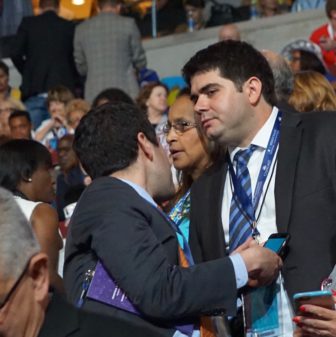 Devon Puglia, right, at the Democratic National Convention with Mike Mandell, director of the state party.

Kelly Donnelly will succeed Puglia as the communications chief, while Chris Smith will take over for Mounds as director of policy and government affairs, essentially the administration chief lobbyist with the General Assembly.

Bergman joined the administration after the 2014 campaign to oversee communications, then became the deputy chief of staff under Brian Durand, who is remaining as chief. There are no immediate plans to fill Bergman’s job.

The departures come amid speculation that Malloy would accept a post in a Hillary Clinton administration if one were offered, an unlikely possibility if a federal grand jury does not quickly conclude its investigation of the Democratic Party’s solicitations of state contractors to support the governor’s re-election.

Even without the complication of an unresolved investigation, Clinton has a deep reservoir of potential appointees. A Politico story Wednesday about potential choices for cabinet and other senior posts did not mention the governor.

The departures Wednesday also reflect the cycle of staffing in a gubernatorial administration. The changes now set up the administration for the final two years of Malloy’s second term.

Bergman has been planning to leave for family reasons: His wife is due to give birth to their first child this month. He is going to work for Grossman Heinz, a political consulting firm with offices in Simsbury and New York.

Andrew Grossman, a principal, was the staff director for the Democratic National Convention’s Platform Committee, for which Malloy was the co-chair. His clients include MGM Resorts International’s campaign against a third tribal casino in Connecticut.

Mounds, one of the longest-serving members of the administration, and Puglia say they are weighing options. Puglia, who carries two smartphones, said his only immediate plans were to go somewhere without cellular phone service for a time.

Puglia’s successor, Donnelly, is now chief of staff to Commissioner Dianna Wentzell at the State Department of Education. She previously was a communication director there and has held press jobs in New Jersey for the Democratic Assembly Campaign Committee and Senate Democratic majority.

Smith has been with the administration since late 2012 and was promoted to Mounds’ deputy in November 2014. He previously was a lobbyist for Rome Smith & Lutz Government Relations. He also managed state and local political campaigns between 2006 and 2012.

The changes will take effect in September. Mounds says the fall is when the government affairs unit begins laying out priorities for the coming legislative session, making it the right time to leave.

“During a difficult economic period, they’ve helped my administration achieve major goals, including hundreds of millions of dollars in budget savings, improvements to our transportation and energy infrastructures, bringing crime to its lowest levels in decades, and so much more,” he said. “They’ve worked long hours and served the people of Connecticut well. I wish each of them the best in their next endeavors.”