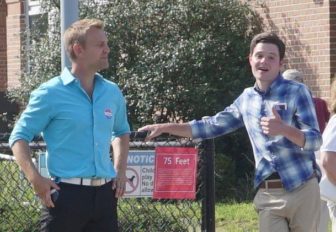 Joshua Elliott, left, poll standing with a supporter who saw him winning.

The Working Families Party, an offshoot of labor unions, was a big winner, claiming victory for all five candidates it backed in primaries, including Sens. Ed Gomes and Marilyn Moore of Bridgeport, whose careers were endangered after being denied the endorsement of the city’s Democratic machine.

It also backed an incumbent, Sen. Terry Gerratana of New Britain over Sharon Beloin-Saavedra, and a challenger, Michael A. DiMassa, over Rep. Louis P. Esposito Jr. of West Haven.

Gerratana won with 67 percent of the vote.

DiMassa won by 22 votes, 567 to 545, just outside the threshold for an automatic recount.

“Tonight’s results are proof positive that there is a significant shifting of the tide in Connecticut state politics,” said Lindsay Farrell, the party’s state director. “People are tired of legislators whose only solution to fixing the budget crisis is cutting taxes for the wealthy. That hasn’t worked, and it’s the working and middle class voters who have paid out of pocket for years. People want fair taxation policy and they care about raising the minimum wage, passing paid family leave, and ensuring debt-free higher education.” 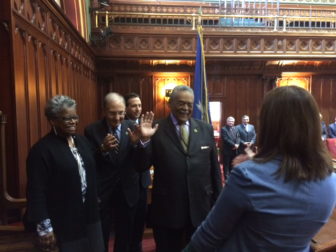 Ed Gomes takes the oath from Secretary of the State Denise Merrill after winning a special election. From left, his former intern, Sen. Marilyn Moore, with Sens. Martin Looney and Bob Duff.

Organized labor tried to make Elliott, a supporter of Bernie Sanders and his call for a higher minimum wage and higher taxes on the wealthy, a vessel for their displeasure with the legislature’s Democratic majority over its passage of an austerity budget that lays off state employees and cuts social services.

Elliott said his campaign began with a core of volunteers from the Sanders campaign, all interested in looking for another way to pursue a progressive agenda.

Elliott jumped into the race after Sanders narrowly lost the Connecticut presidential primary and the General Assembly rejected a tax increase on the wealthy, answering a call by the labor off-shoot, the Working Families Party, which supported his campaign with door-to-door canvassers and other support.

“This is as little about me as our team can possibly make it,” said Elliott, a non-practicing lawyer and owner of the Common Bond Market, a health-food store in Shelton.

Elliott called his campaign a test of progressive ideas, many promoted by Sanders, who lost in Hamden to Hillary Clinton.

Pascarella said the “insurgent campaign” had a natural advantage in a low-turnout primary.

“It’s basically been an outsider campaign, so to speak, versus my extensive experience,” said Pascarella, a long-time town councilman with deep local roots. “They brought in a lot of canvassers from New York City. They put a huge ground effort into what would normally be a local race. It’s just the extreme displeasure with the governor and with Brendan. I was sort of shrugging my shoulders a little bit and saying, ‘What do I have to do with any of that?’ ”

Sharkey campaigned for Pascarella, poll standing early Tuesday and then making calls. But he said he never saw Elliott’s campaign as about him. The origins were a desire of Sanders’ supporters to involve themselves in local politics, he said.

“Every indication I’ve gotten personally is that that wasn’t the intent. This started really with a town committee primary,” Sharkey said.

Moore and her labor allies crushed Tom McCarthy, the president of the city council. Unofficial results reported to the secretary of the state’s office showed Moore winning, 63 percent to 37 percent.

Gomes had a closer race over Dennis Bradley, the chairman of the school board, winning 54 percent to 46 percent.

In other Democratic House races, incumbents won big in Stamford and lost big in New London, according to the secretary of the state’s office.

In the 77th House District of Bristol, the endorsed candidate, Laura Bartok, beat Christy Matthews, 82 percent to 18 percent. The seat is held by a Republican, Cara Pavalock.

Turnout across all the races was 19 percent.