The report from the Connecticut Conference of Municipalities urges state legislators to take several steps, including expanding the variety of taxes communities can collect and committing to promised sharing of state sales tax receipts despite big projected deficit in the next state budget.

The property tax is the chief revenue source for most municipalities, with 71 percent, on average, coming from property taxpayers. The second-largest source of funding is state grants. Using those funds, cities and towns provide a wide array of services including:

The property tax accounted for 39 percent of all state and local tax revenues in Connecticut in 2014, generating $9.7 billion.

Connecticut’s per capita property tax burden in 2014 was $2,522, well over the national average of $1.434 and third-highest among any state.

Long criticized as one of the most regressive taxes — it does not vary directly based on the taxpayers’ ability to pay — the property tax only works, CCM argues, if two conditions exist.

A community must have enough property and wealth to generate “enough revenue at a reasonable cost,” and state aid must be “sufficient to fill local revenue gaps,” the report states. “For many communities in our state, neither condition exists.”

And some Connecticut municipalities are extremely dependent on the property tax. Eleven towns get 90 percent or more of their revenue from this levy while another 55 municipalities get at least 80 percent this way.

Cities and towns have long pushed for the option to collect different types of levies other than the property tax, and CCM repeats that recommendation here.

The report also argues that property tax exemptions are taking their toll on local budgets.

There are 77 property tax exemptions mandated by state law. “Towns and cities lose staggering amounts of revenue as the result of these exemptions,” CCM wrote, adding these force all communities to raise property tax rates.

And in some communities this problem is huge. In both Hartford and Mansfield, over half of the property is exempt from local taxation, while New Haven comes close to 50 percent.

The report recommends new limits on property tax exemptions to ease this burden.

An average of 60 percent of local budgets statewide go to pay for elementary and secondary education, and in some towns the share exceeds 80 percent.

The Education Cost Sharing grant, which totals just over $2 billion, is the state’s largest education grant. It is currently underfunded by $600 million based on the current formula.

Hartford Superior Court Judge Thomas G. Moukawsher ruled last Wednesday that this system is unconstitutional. He gave the legislature 180 days to submit a plan to correct the matter, but it is unclear now whether the state will appeal this decision to a higher court. 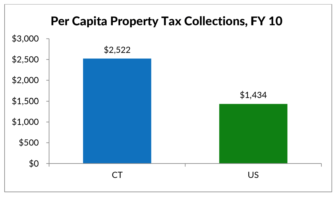 “CCM is absolutely correct that one of the keys to property tax reform is education finance reform,” said Jim Finley, principal consultant to the coalition of municipalities and education advocates that sued to challenge the state’s education funding system. “That is one of the reasons that (the coalition) brought a case in the first place.”

“Senate Republicans want to implement policies that reduce burdens on our municipalities so that they can better work toward making local property taxes affordable,” Senate Minority Leader Len Fasano, R-North Haven, said. “Such policies would include municipal mandate relief, requiring a two-thirds vote to enact any unfunded state mandate, and adjusting prevailing wage thresholds to appropriate levels.  In addition to those changes that can be made tomorrow if property tax relief is actually desired, we believe that the state needs to get its finances under control and solve projected deficits in a thoughtful manner without arbitrary reductions to municipal aid for the sake of political sacred cows.”

Senate President Pro Tem Martin M. Looney, D-New Haven, said the municipal call for new local revenue-raising options is a “recurring theme,” adding that, “I think that is obviously something that will go in the hopper for consideration next year.”

State lawmakers and Gov. Dannel P. Malloy trumpeted a plan adopted in 2015 to share a portion of sales tax receipts with cities and towns.

Significant revenue sharing began this fiscal year, as planned, but was scaled back considerably.

Cities and towns were supposed to share $246 million this fiscal year. But as legislators and Malloy struggled to close a $1 billion hole in state finances without raising taxes, they reduced the revenue-sharing to $185 million.

And to help pay for the revenue-sharing, they cut other municipal grants by about $100 million from the original 2016-17 budget.

Municipalities are supposed to get close to $300 million in sales tax receipts next fiscal year, but nonpartisan analysts say there is an even larger deficit, approaching $1.3 billion, built into 2017-18 state finances.