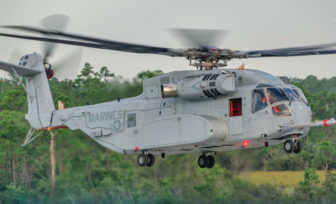 The CH-53K in flight testing.

Teamsters Local Union 1150 voted by a 15-1 margin Sunday for concessions sought by Lockheed Martin as part of an incentives deal with the state that will keep its Sikorsky Aircraft subsidiary and production of its next generation of helicopters in Connecticut, state officials said.

“Today’s vote ensures that Sikorsky – one of the state’s iconic businesses – will remain for years to come in the state they have long called home,” Gov. Dannel P. Malloy said. “Hundreds of Connecticut-based supply-chain companies and their thousands of employees will also benefit as a direct result from the CH-53K being built right here.”

The General Assembly voted overwhelmingly last month for a package of incentives that could give Lockheed as much as $220 million over 14 years if it meets goals for hiring, capital investments, payroll increases and supply-chain purchases. The production of the CH-53K King Stallion heavy lift helicopter is projected to mean $69.2 billion for the Connecticut economy.

The Teamsters vote was 2,104 to 140, according to legislative leaders. Teamsters officials could not be reached for comment, but the deal approved Sunday reportedly will cut the pay and retirement benefits of future employees.

“Lockheed Martin’s decision to build the King Stallion helicopter at Sikorsky’s facility in Connecticut is a significant victory for the eight thousand workers at Sikorsky and our state’s economy,” said Senate President Pro Tem Martin M. Looney, D-New Haven.  “I want to thank the the members of Teamsters Local 1150 for overwhelmingly approving the proposal that will benefit hundreds of suppliers throughout Connecticut and keeping good-paying jobs here for today’s workforce and tomorrow’s graduates.”

“The members of Teamsters Local 1150 voted to keep good-paying, reliable jobs in Connecticut for today, tomorrow and over the next generation,” said Senate Majority Leader Bob Duff, D-Norwalk. “Connecticut is making smart investments to create jobs and grow our economy. The economic impact of this project will create and sustain thousands jobs in the manufacturing supply chain across all corners of the state for years to come.”

Even with the incentives and new production, Sikorsky’s current employment of 7,855 is projected to drop to 6,582 over the next six years, based on dwindling orders for the Black Hawk, an Army helicopter. The deal calls for employment to exceed 7,200 in 2024 and top 8,000 in 2032.