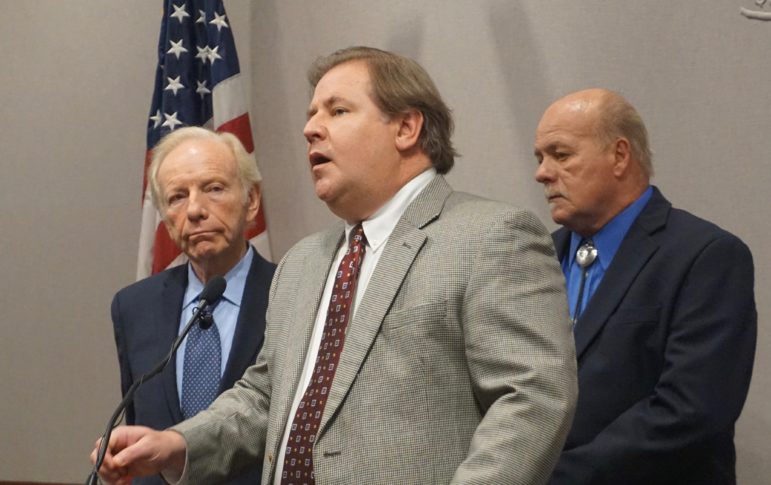 A dozen years after making the case in Washington that the Schaghticoke Tribal Nation wasn’t really a tribe, former U.S. Sen. Joseph I. Lieberman was introduced Friday as one of the lawyers demanding the state of Connecticut pay $610 million to compensate the Schaghticokes for 2,000 acres of tribal lands taken over 117 years, beginning in 1801.

“Looking back at what happened 12 years ago, for me, the opportunity to be involved in this litigation on behalf of the Schaghticoke Tribal Nation is what might be called a second chance to do right by them,” Lieberman said. “I think over time the history is clear, that they’ve been treated not just unfairly, but grossly unfairly. This gives me an opportunity to do something about that.”

That opportunity does not include working pro bono. Lieberman, who moved to New York after after declining to seek re-election to the Senate in 2012, is taking the case on contingency as is the lead counsel, Austin Tighe of the Texas litigation firm of Nix Patterson & Roach. If successful, the lawyers will share in the damages.

A member of Kasowitz, Benson, Torres & Friedman, the New York firm where Lieberman landed as a senior counsel and rainmaker, filed the suit Thursday in Superior Court, but the Schaghticokes’ publicity and legal team delivered opening arguments Friday at a press conference at the Legislative Office Building in Hartford.

[To read the full text of the lawsuit, click here.]

Tribal Chief Richard Velky introduced Lieberman, who was Connecticut’s attorney general for six years before his election to the Senate in 1988, Tighe and a Washington lobbyist named Tom Rodgers, a member of the Blackfeet Tribe with a long list of tribal clients and a knack for speaking lyrically.

“It would seem the golden season is upon us now, the season where one can hear winter’s footsteps, the falling leaves of autumn,” Rodgers said, greeting the press. “I speak to you today with truth, and truth in my words.”

The press conference was arranged by Sullivan & LeShane, a public-relations agency affiliated with a Hartford lobbying firm of the same name. A member of a rival lobbying firm that represents the Mohegan Tribal Nation, a federally recognized tribe and operator of the Mohegan Sun casino, sat to the side, recording the scene on a smart phone.

Casino gambling was a factor prodding Lieberman and others who objected 12 years ago to the Bureau of Indian Affairs granting federal recognition to the Schaghticokes, a step that would have allowed them to join the Mohegans and Mashantucket Pequots in asserting a right under federal law to open a casino in Connecticut.

“The mood, the reality on the ground here in Connecticut is different than it was 12 years ago,” Lieberman said, noting the state was trying to adjust to the idea of a major gambling presence and wondering if other tribes also would win recognition. “The possibility of a third through the Schaghticokes built on an anxiety the state was going to be covered with casinos.”

The lawsuit filed Thursday is not part of an effort to build the case for federal recognition and the ability to open a casino, Lieberman said.

Joseph I. Lieberman, who fought recognition for the tribe as a senator, says the suit is a “second chance to do right by them.”

The Mohegan Sun and the Pequots’ Foxwoods casino resort are now two of the world’s largest casinos, but they face growing competition and dwindling market share because of casinos in New York and Rhode Island, plus an MGM casino under construction in Springfield.

The two federally recognized Connecticut tribes are seeking permission from the General Assembly to jointly build a third casino somewhere in the I-91 corridor north of Hartford to compete with MGM.

The legislature passed a law that essentially gave them permission to find a willing host community, with no guarantee of winning a second law authorizing construction.

In fact, Attorney General George Jepsen has outlined significant legal obstacles to a bill benefitting only the Mohegans and Mashantucket Pequots. The Schaghticokes were enlisted by MGM to compete with the Mohegans and Pequots, even though they are not federally recognized.

MGM is playing no role in the land claim, Velky said.

“This is not about a casino, OK? This is not about taking lands,” he said. “This is about being unconstitutional, what had happened to the Schaghticoke people by the uncompensated lands that were taken from us.”

Tighe and Lieberman stressed that, unlike other tribal land claims, the lawsuit is not directed at the present owners of the land once controlled by the Schaghticokes. It is solely directed at the state of Connecticut.

At $610 million for 2,000 acres, that comes to $305,000 an acre. Tighe said the claim was based not on present value, but the land’s worth when it was taken, plus 6 percent in compounded annual interest.

Tighe said the state held the lands in trust and was responsible for their dispersal, so the only claim the tribe considered was against the state.

Rodgers smiled and offered another reason.

“We have a certain sense of empathy for people who lose their homes and lose their land,” he said. “We are not in the business of removing people from their homes.”