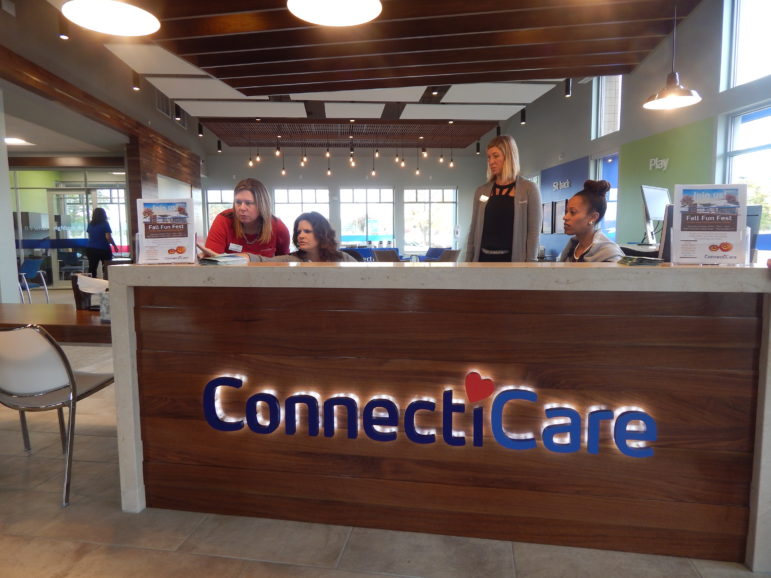 If there were any question whether there would be demand for a health insurance retail store, ConnectiCare officials got their answer in the days before their first such facility opened in Manchester, while staff were being trained inside.

“People started showing up before the doors were even open,” said David Gordon, the Farmington insurer’s senior vice president of strategy and product innovation.

The store, located at 1487 Pleasant Valley Road, near the Buckland Hills mall, is the product of consumer research that found many customers wanted to deal with the insurer face to face, Gordon said. He likened it to a Verizon store or an Apple store, and noted that while many people like to deal with issues online or by phone, some want in-person help.

“It’s a complicated product,” he said.

The store, in a 6,000-square-foot former brew pub space, is the first run by a health insurance company in Connecticut, but it’s not wholly unique nationally. Carriers have been opening similar facilities in Florida, New York, and other states. UnitedHealthcare, for example, opened its first customer center in New York’s Chinatown in 1994 and now has more than 20 in 10 states, with another opening in Buffalo next week.

Visitors to the UnitedHealthcare centers can sign up for plans, compare options, get help identifying other public benefit programs they might qualify for, and get help addressing insurance issues, such as resolving claims issues or finding a care provider, spokeswoman Maria Gordon-Shydlo said. Many of the sites also host health and wellness events for the community.

In picking sites for retail facilities, UnitedHealthcare typically looks for places where it has many individual members in Medicare or Medicaid plans and where there’s an opportunity to grow membership and provide education, Gordon-Shydlo said. In Chinatown, for example, many customers were first-generation health insurance customers and had lots of questions. Demand at another site, in Edison, N.J., was so high the customer center recently moved to a new facility three times as large, she said.

ConnectiCare has plans to open smaller stores in Newington, Bridgeport and Orange, and possibly additional locations. Gary Wolters, the company’s vice president of retail operations, said the goal is to have a store within 30 minutes of 90 percent of the state’s population.

Just over a dozen people stopped in the day the Manchester store opened, last Friday, and another 20 came Monday, said Laurie Blier, ConnectiCare’s director of retail operations. Many wanted to shop and compare options – the open enrollment period for Medicare and Medicare Advantage plans began Saturday – and some came to make payments or ask questions about their benefits. Others already have scheduled appointments for early November, when open enrollment begins for individual-market health plans, including those sold through the exchange. The store is open from 9 a.m.  to 7 p.m., Monday through Saturday, but could open Sundays if it gets extremely busy during open enrollment, Gordon said.

The store has offices where customers can chat with staff, an area for seminars on Medicare Advantage and other health topics, and a room in the back where the company envisions hosting yoga, Zumba and tai chi classes for the community. There are also plans, beginning in the spring, to have a nurse available who can conduct health assessments and connect people with disease management programs if needed.

The store is intended to serve all ConnectiCare customers, including those who get their coverage through an employer-sponsored plan.

While the store is an addition to ConnectiCare’s website and call center, the company recently pulled back on one avenue customers have had to shop or get help with benefits – brokers. The company will no longer pay commissions to brokers for plans sold through the state’s exchange, although it will still pay them on individual-market plans sold outside the exchange.

The Newington, Bridgeport and Orange locations will be located with new medical clinics run by CliniSanitas, which currently operates facilities in Florida and South America. The clinics will offer primary and specialty care, walk-in, urgent care, laboratory and diagnostic imaging services. All staff at the clinics speak English and Spanish. Gordon said the idea is to make it easier for people to get care, and to serve the state’s growing Hispanic population. The clinics will take ConnectiCare customers and those paying cash, but won’t take other insurance.