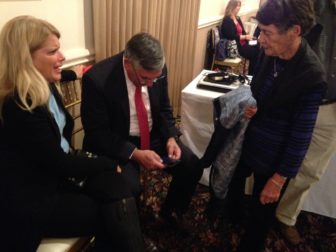 Senate Republican Leader Len Fasano consulting his phone as the votes came in.

Republicans made stunning gains in state legislative races Tuesday to force a likely 18-18 tie in the Senate and to leave Democrats with their smallest House majority in three decades, overcoming a Democratic tide at the top of the ticket that carried Hillary Clinton, U.S. Sen. Richard Blumenthal and all five U.S. House incumbents to victory in Connecticut.

With a gain of three seats in the state Senate, the GOP transformed a 21-15 Democratic majority into an evenly divided chamber where ties can be broken by the presiding officer, Democratic Lt. Gov. Nancy Wyman.

With possible recounts in two races, Republicans made a net gain of eight seats in the House of Representatives, leaving Democrats with a probable 79-72 majority when the new General Assembly convenes in January. It is the biggest shift of power in the legislature since the combination of a Ronald Reagan landslide and the party lever delivered a solidly Republican legislature in 1984.

The night was celebrated by a blue-state GOP as a vindication of a campaign message that two decades of domination by a Democratic legislature, the last six years with a Democratic governor, have left Connecticut in a state of chronic fiscal crisis, with more trouble over the horizon in the form of an unfunded pension liability.

“Not since the removal of the party lever vote have we seen such a turnout in a presidential year for Republicans,” said House Minority Leader Themis Klarides, R-Derby. “House Republicans ran on our record of fiscal sanity and our commitment to our common-sense approach to governing what has become an out-of-control State of Connecticut. This should come as a wake-up call: Connecticut taxpayers and voters are fed up.”

“Clearly I think it sends a message to the Democrats” in the Senate and the House, said Len Fasano of North Haven, the Senate Republican leader. “You guys are on the wrong track. The people are upset.”

Now, the Republicans will have to show if they can shift from the role of critic in the minority to a force for changing government. By winning over one senator and four House members, the GOP could set the next budget – if it chooses.

At least two Democratic senators, Paul Doyle of Wethersfield and Joan Hartley of Waterbury, have held out in the past in favor of spending cuts and in opposition to tax increases. 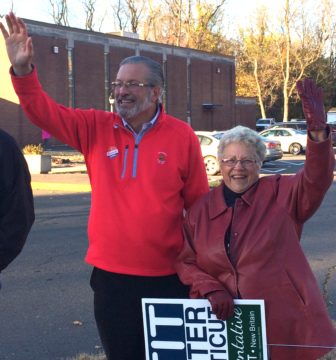 Dr. William Petit and supporter Nancy Blanchette of Bristol at Our Lady of Mercy parish center in Plainville.

All in all, legislators are probably facing a power structure for which there is no obvious playbook.

“While tonight’s results weren’t what we hoped overall, we will continue to pursue an aggressive agenda to grow jobs, strengthen our economy and help middle class families get ahead,” Looney said.

House Majority Leader Joe Aresimowicz, D-Berlin, the choice of Democrats to take over as speaker in January, blamed the heavy spending by Super PACS for the losses and offered no sign of how or whether he will reach out to the strengthened GOP.

“We always knew this would be a tough campaign, and that people are sick and tired of the partisan divide that has engulfed our country from Washington on down. As with every election, we won some seats and lost some others, and clearly the out-of-state independent money that blanketed Connecticut played a significant role,” he said.

Independent expenditure groups spent more than $1.3 million on targeted races, with business groups outspending unions by a 2-1 margin. The two biggest spenders were the Connecticut Business and Industry Association and Grow Connecticut, a Super PAC indirectly funded by corporations such as Koch Industries and Walmart.

Republicans needed to beat three of four vulnerable Democrats and win an open Democratic seat to win a majority in the Senate. They nearly succeeded.

The Associated Press reported Sen. Steve Cassano, D-Manchester, won re-election over Lorraine Marchetti by a comfortable margin. Incomplete returns on the secretary of the state’s web site had Marchetti in the lead.

In the House, Republicans appeared to unseat six incumbents and capture several open Democratic seats. Those gains were offset by the defeat of  two Republican freshman, both from Groton: Aundre Bumgardner and John Scott. Democrats also appeared to pick up at least two open seats.

Bumgardner won wide recognition two years ago, winning as a 19-year-old and becoming the first black Republican in the House in decades.

The first Republican victory was notched by Dr. William A. Petit Jr., whose campaign was roiled in the final weeks by a union attack ad against Petit, the victim of a horrific home invasion in 2007. He defeated Rep. Betty Boukus, D-Plainville, the co-chair of the legislature’s bonding subcommittee. 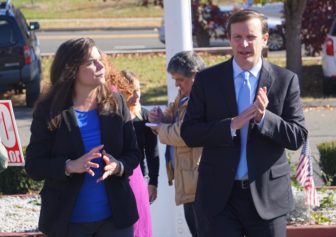 But over the next 90 minutes, Democratic and Republican leaders of the General Assembly rode a see-saw: The early numbers put the GOP up, while a second wave of returns showed some offsetting Democratic wins of Republican seats.

“My stomach is in a knot,” Fasano said as results trickled in. “My phone’s going crazy.”

Republicans won two Democratic House seats in Enfield, one an open seat and the other held by Rep. David Alexander, whose second drunken-driving arrest was the dominant issue.

The House minority leader’s sister, Nicole Klarides-Ditria, unseated Rep. Theresa Conroy, D-Seymour, in one of the races where CBIA and Grow Connecticut opposed a Democratic incumbent and supported a Republican challenger.

In addition to Boukus, Alexander and Conroy, the other House Democratic incumbents to lose were Phil Miller of Essex, David Zoni of Southington, and Christine Randall of Killingly.

The Working Families Party, a labor offshoot allied with Democrats, now has no clear path to forward its agenda, primarily passage of a $15 minimum wage. Like the House Democratic leader, the group blamed outside spending, not the majority party’s record.

“Tonight’s results show corporate money can win elections. Republicans may not have won a majority tonight, but corporate politicians did. Republican-friendly PAC money by Koch brothers, Walmart, the CBIA, and big tobacco saturated our elections, spreading the doom and gloom about our economy which has frightened voters,” said Lindsay Farrell, the WFP’s state director. “Tonight’s results spell disaster for working families across Connecticut.”

House Speaker J. Brendan Sharkey, D-Hamden, who announced he would  not to seek re-election after a Working Families candidate, Josh Elliott, challenged him for the Democratic nomination, said his party most probably will have to take a broader look in its post-mortem.

One irony of the last budget, Sharkey said, was that it hewed closer to the line drawn by CBIA than it did to the Working Families Party and other labor groups, who demanded higher taxes on the wealthy as an alternative to layoffs and reductions in services.

“I think Democrats have to do a better job of comunicating that they understand the changes that need to take place, the structural changes that need to take place in state government and, frankly, in local government,” Sharkey said. “Earlier this year we passed a budget that by any measure is procisely what the public expects in terms of no tax increases and reductions in spending.”