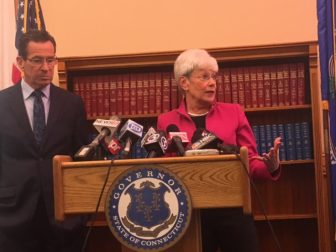 Senate President Pro Tem Martin M. Looney, D-New Haven, said Wednesday that Democrats will retain a working majority in an evenly divided Senate next year through an alliance with Democratic Lt. Gov. Nancy Wyman, who can break ties as the presiding officer.

“It will be an effective Democratic majority, because she becomes our 19th vote,” Looney said.

At a victorious post-election press conference, Senate Republican Leader Len Fasano, R-North Haven, pushed back at Looney’s assertion, saying his staff still was exploring the ramifications of governing with the first evenly divided chamber since 1893, when a smaller Senate had a 12-12 tie for a single term.

“There is no longer a majority party in the state Senate,” Fasano said, surrounded by his caucus. “We are now a chamber of equals. The old way of doing things is gone – is gone. We need a brand-new playbook. We need brand-new rules. This is uncharted territory, but what is clear is the Republican state Senate is equal to the Democrat state Senate. We have equal voice, equal power and equal policy making.” 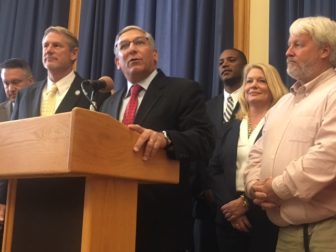 Gov. Dannel P. Malloy, who consulted with Looney by phone Wednesday morning, told reporters he had called the leaders of the four caucuses to talk about a cooperative approach.

“Connecticut can show the country that we can continue to make progress, even when we feel divided,” Malloy said. “We can demonstrate that it is possible to fight hard throughout a tough election, and then get back to work on behalf of our constituents.”

Wyman said she stood ready to break a tie vote on one of the Senate’s first orders of business in January: The re-election of Looney as president pro tem, the top leader of the Senate.

Looney said part of their conversation centered on the desire of Republicans to share responsibility for drafting what is certain to be an unpopular budget, given non-partisan projections of a shortfall requiring tax increases, deep spending cuts or a mix of the two.

Fasano said Republicans want that responsibility, whatever the political risks.

With Wyman’s new role, the Malloy administration becomes a de facto member of the Senate Democratic caucus, one of the many new dynamics of governing in Hartford in January, when the legislature convenes.

The legislature writes its own rules at the start of every two-year term, both for how the General Assembly is jointly run and for each of the two chambers, the 36-member Senate and 151-member House.

Looney said he expected the Senate to have evenly divided Senate representation on each of the legislature’s joint committees.

Looney’s alliance with Wyman works only on issues on which he can hold his caucus together. Fasano laughed when asked if he had invited Sen. Joan Hartley, D-Waterbury, a fiscal conservative who typically votes with the GOP on the budget, to defect.

When pressed, he said he had not.

Democrats appeared to win a 79-72 majority in the House, but Secretary of the State Denise Merrill said at least one recount was possible. Until the death of one member last summer, Democrats had held an 87-64 advantage.