An invitation to Trump to meet Syrian refugees in New Haven 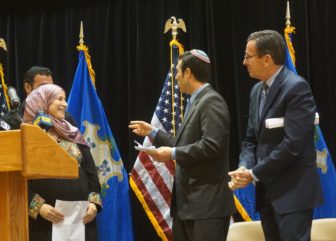 Woodbridge — The head of a program that has resettled about 350 Syrian refugees across Connecticut over the past year extended a public invitation Tuesday to President-elect Donald J. Trump to meet with his clients before acting on a campaign pledge to suspend the resettlement of Syrians in the U.S.

“Come and meet them,” said Chris George, the executive director of IRIS, the Integrated Refugee & Immigrant Services. “We are inviting the president-elect to come to our office, sit down, have a cup of coffee and meet refugees face to face, hear their stories, understand why they had to flee their home countries, why they come to this great country.”

George joined Gov. Dannel P. Malloy, several Syrian refugees and their sponsors at a Jewish Community Center here to celebrate the state’s relatively uneventful embrace of refugees as an early Thanksgiving, a holiday whose roots reach to the first European immigrants to arrive on U.S. shores.

Judy Alperin Diamondstein, the chief executive officer of the Jewish Federation of Greater New Haven, said a half dozen Jewish synagogues have come to together to support two Syrian families. Statewide, 50 communities across Connecticut have offered to resettle refugees in the past year. 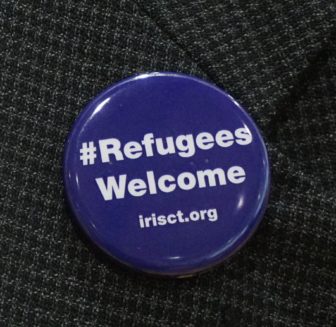 A button worn by Chris George of IRIS.

Malloy, who famously clashed with Vice President-elect Mike Pence when the Indiana governor tried to block Syrian refugees from relocating in his state, offered equal measures of defiance and conciliation to the incoming administration.

He praised Pence for being a moderating influence on Trump since the election and said he did not see Trump barring refugees on the basis of religion or national origin.

“I’m hopeful the rhetoric of a camapign will give way to a sensible approach to honoring our long-term international commitments,” Malloy said.

But he also said Connecticut would not assist federal immigration authorities in broader deportation efforts, reiterating a policy in place since late 2014 when the administration announced it would hold for deportation only immigrants convicted of a violent felony or those subject to a court order.

“Don’t depend on us to take those actions on your behalf,” Malloy said. And if the Trump administration threatened to withhold federal funds in retribution, Malloy said,  “We would sue them. We would sue them because they would be violating the law.”

Malloy shrugged off questions about what it would mean if Trump works with the new Congress to pass a law withholding federal grants for law enforcement from so-called “sanctuary cities,” where police do not ask about a person’s immigration status.

New Haven is often included on lists of sanctuary cities, but Malloy said the term has no legal meaning. His administration has repeatedly insisted there is no law or policy in Connecticut that runs afoul of federal immigration laws.

“There is no such thing as sanctuary cities. It is a political term that was made up to condemn folks. I understand other people have adopted it as something to aspire to be, but you could not define what a sanctuary city is…in law,” Malloy said.

New York City Mayor Ed Koch signed an executive order in 1989 offering undocumented immigrants a measure of protection as a sanctuary city. Rudolph Giuliani, a Trump adviser, embraced the policy upon becoming mayor in 1994 – an issue Mitt Romney used against him in the race for the 2008 GOP presidential nomination.

Now Romney and Giuliani are both under consideration to become Trump’s secretary of state.

Three Syrian refugees addressed the audience Tuesday, testing English that remains a work in progress. They all mastered one phrase: “Thank you.”

They were introduced only by their first names, an attempt to offer a measure of privacy here and to protect relatives who remain in Syria. Abir and her husband, Nidal, who live in the New Haven area and are expecting a child in February, said they are adjusting to life in the U.S..

Wafaa and her family have relocated to the Danbury area, where they were assisted by DARA, the Danbury Area Refugee Assistance. Wafaa has learned enough English to go on interviews by herself and land a job in a cafeteria.

“We all kind of thought, what if this was our familiy? What would we want? How would we want to be welcomed? What if we were coming to a place that was brand new?” said Karen Foster of DARA, who accompanied Wafaa. “And we just did our best to put everything together.”

George, who has worked resettling refugees for 11 years in Connecticut, said about 900 refugees from around the world came to the state in the past year. He said he has declined suggestions to keep resettlement efforts out of the public eye, saying there is no reason not be transparent.

“I thought to myself a program like this that welcomes thousands of persecuted people from all over the world and helps them start new lives in the United States, we should keep this secret? That’s crazy,” he said. “This is the best thing we do. We should celebrate this program, and this is why today is so important. We should celebrate, because refugees strengthen our economy. They enrich our communities. They diversify us. They help us understand the world, and we need more of that.”

He said he is trying to find the right person on the Trump transition team to formally extend an invitation to come to New Haven for some coffee and conversation with refugees.

The family Malloy welcomed to Connecticut after Pence objected to their arriving in Indiana was absent Tuesday.

“That family can’t be with us today, because mom is in college studying English, son is in school studying English and other things, and dad is working, contributing in their own way to our growth as a society,” Malloy said. “We need to stand up for individuals. We need to do our part to protect them.”

A three-judge panel on a federal appeals court last month blocked Pence from keeping refugees from Indiana, chiding him for basing his ban on a fear of terrorism, not evidence.

Writing for the panel, Judge Richard Posner said Pence’s argument was “the equivalent of his saying (not that he does say) that he wants to forbid black people to settle in Indiana not because they’re black but because he’s afraid of them, and since race is therefore not his motive, he isn’t discriminating.”

One of the judges joining in the decision was Diane Sykes, who is on Trump’s list of potential Supreme Court nominees.