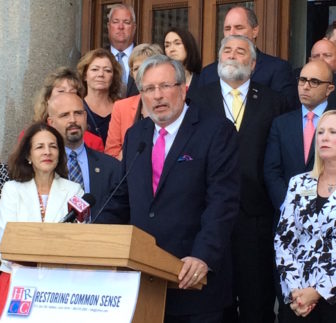 Dr. William Petit Jr. speaking on the Capitol steps during his campaign for the state House.

Labor United for Connecticut, an independent expenditure group affiliated with the Service Employees International Union that came under fire for an attack ad in October, disbanded this week after refunding more than $100,000 to its member unions.

Its final campaign finance report shows that Labor United ceased to be a political force after Oct. 26, when it pulled a series of digital ads that were harshly criticized by Democratic allies and Republican opponents.

Despite holding a six-figure cash reserve, it never resumed advertising or other activity in support of Democratic candidates for the General Assembly. Among its last acts before filing a termination report Tuesday was the refund of $109,388 to member unions.

Near-identical ads used against Dr. William Petit and several other Republican legislative candidates attempted to tie them to Donald J. Trump and his “attacks on women and families.” When directed against Petit, whose wife and two daughters were killed during a home invasion in 2007, they provoked outrage as insensitive to the victim of an iconic crime.

Petit was among the victorious challengers who helped the GOP make a net gain of eight seats in the House, leaving Democrats with their smallest majority, 79-72, since winning control of the chamber in 1986.

SEIU disavowed prior knowledge of the ad its constituent unions funded through Labor United of Connecticut, citing the rules on independent expenditures.

Anyone who clicked on the ad was directed to Labor United’s web site that portrayed Trump and Republicans as bad on policies affecting women and families, including paid family leave and paid sick days. The web site is inactive.