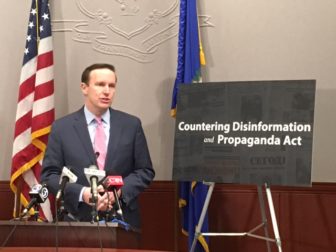 The legislation puts the State Department in the business of funding overseas news sites in hopes that could counter fake news propagated in their countries, such as a false story that President-elect Donald J. Trump hung up on the presidents of the Baltic nations.

“The United States wouldn’t be picking the messaging. The Untied States wouldn’t be censoring anyone’s newspaper or web site,” Murphy said. “We simply would be offering to help other countries’ in their efforts to produce more independent journalism to counter this Russian propaganda narrative.”

Murphy said the program would expand State Department efforts to fight online recruiting and propaganda by ISIS and other terrorist networks, providing $160 million over the next two years for a Global Engagement Center.

Speaking to reporters in Hartford, Murphy said the funding would be used in part to bankroll independent journalists in nations with little tradition of a free press. Murphy dismissed suggestions that U.S. funding might undermine the independence of any foreign journalist, saying the money would come without strings.

Elements of the Countering Disinformation and Propaganda Act proposed by Murphy and Sen. Rob Portman, R-Ohio, were included in the National Defense Authorization Act passed last week by Congress.

The legislation does not address Russian propaganda directed at U.S. citizens.

“This bill is primarily dedicated to countering propaganda and disinformation outside the United States,” he said.

Congress has begun to investigate what the CIA has concluded was Russia’s role in trying to influence the U.S. presidential election by hacking and other means.