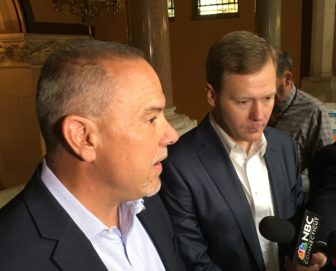 House Speaker Joe Aresimowicz, D-Berlin, shook up committee leadership assignments in his second day as speaker Thursday, including the removal of Rep. Jeffrey Berger of Waterbury, his one-time rival for majority leader, as co-chair of the Finance, Revenue and Bonding Committee.

Rep. Jason Rojas of East Hartford, a deputy majority leader, succeeds Berger at finance, one of the legislature’s two money committees. As Aresimowicz already made clear, the other, Appropriations, will continue to be led by Rep. Toni Walker of New Haven.

Change always comes with a new speaker, but these assignments will be closely analyzed as the Democratic majority copes with dissatisfied constituency groups, including organized labor, and with a Republican minority that’s gained 35 seats in six years.

Aresimowicz promoted two young legislators, Reps. Sean Scanlon of Guilford and Caroline Simmons of Stamford, naming them as committee co-chairs after single terms in the House: Scanlon at Insurance and Real Estate; Simmons at Commerce.

Rep. Robyn Porter of New Haven, a member of the Communication Workers of America, is the new co-chair of the Labor and Public Employees Committee, succeeding Rep. Peter Tercyak of New Britain.

“Robyn’ll be great,” said Tercyak, who will be an assistant deputy speaker. “It’s very important for labor to have someone they trust, who knows and hears their concerns.”

Berger, who could not be reached for comment, competed with Aresimowicz in 2012 for majority leader, the post that J. Brendan Sharkey vacated to become speaker. Aresimowicz won in a secret ballot. Sharkey named Berger to Finance two years ago when the House co-chair, Patricia Widlitz, did not run for re-election.

Rep. Gregg Haddad of Mansfield, the home of the University of Connecticut, is the new co-chair of the Higher Education and Employment Advancement Committee. He succeeds Roberta Willis, who did not seek re-election.

The assignments were described to CT Mirror by multiple legislative sources Thursday. Aresimowicz spent much of Thursday informing legislators of the new assignments.

Committee co-chairs will have tougher jobs in 2017. With an evenly divided Senate and a narrow Democratic majority in the House, the legislature’s joint committees will barely be controlled by the Democrats, with advantages of just one or two members.

Sen. Cathy Osten of Sprague is the Appropriations co-chair. Sen. Paul Doyle of Wethersfield is the new Judiciary co-chair, succeeding Eric Coleman, who resigned Wednesday to seek a position as a judge. Bye is returning to the Higher Education panel she co-chaired before going to Appropriations.

2017 Committee Co-chairs
With an evenly divided Senate, every committee has a Senate Democrat and Republican sharing the co-chair duties. Internship and Regulations Review are bipartisan committees, where the top House Democrat is considered the ranking member (RM).