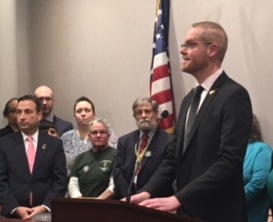 Rep. Jeff Currey, D-East Hartford, speaks in support of a bill that would ban conversion therapy. Currey is a lead sponsor of the bill.

They were surrounded by Democratic allies, but gay activists tried to avoid partisan politics Monday as they called for passage of a state law banning conversion therapy, the discredited practice of using psychological aversion techniques such as electric shock to change a young person’s sexual orientation.

The LGBT community sees potential in Connecticut for a bipartisan victory: The proposed ban is co-sponsored by a half-dozen GOP legislators, including House Minority Leader Themis Klarides of Derby, who objected to what appears to be the tacit endorsement of conversion therapy in the platform adopted last summer at the Republican National Convention.

“We have not been framing this as a reaction to the Trump administration,” Anne Stanback, a leader of the coalition backing the bill, said at a press conference in Hartford attended by the House and Senate Democratic leaders. “We decided to work on this bill last year before the election.

ABC News reported Monday that Peter Sprigg of the Family Research Council, which opposes efforts to ban conversion therapy, says the election of Mike Pence as vice president strengthens their movement in Washington. But a spokesman for Pence has told the New York Times it is false that he supports the controversial practice.

Senate Majority Leader Bob Duff, D-Norwalk, asked about Pence and Trump at the press conference, did not hesitate to do what Stanback would not — level partisan criticism at the new Republican administration.

“Basically, the Trump administration is trying to bring us back to some black-and-white TV show of the 1950s and thinking that’s the right way we should proceed in 2017. So, it is important for us to make statements, to pass laws that protect our residents and our citizens,” Duff said.

House Majority Leader Matt Ritter, D-Hartford, said, “This is a priority of House Democrats, make no mistake about that.”

Klarides, who was not at the press conference, said in an interview that the issue had no place in her party’s platform, and she did not hesitate to co-sponsor the bill.

“I didn’t think it was appropriate in a political platform of any kind,” said Klarides, who noted that her sponsorship reflected her position, not that of her caucus. “When are we going to get to the point where we accept people for who we are?”

Klarides said she sees such conversion therapy as especially harmful to young people coming to terms with their sexuality. Her sister, Rep. Nicole Klarides-Ditria, R-Seymour, a high-school and college athletic trainer, also is among the co-sponsors.

“As a gay youth, and as a gay adult for that matter, never was I broken nor needed to be fixed. Being gay is not a disease and, therefore, does not require a cure,” Currey said.

Dr. Laura Saunders, a clinical psychologist who runs an LGBTQ practice at the Institute of Living in Hartford, said the results of the treatments are often disastrous, even if well-intended.

“Rather than cultivating the self-confidence and effective coping skills that young people need, conversion therapy typically provokes guilt, anxiety, depression, self-hatred and self-destructive behaviors, which can have lifelong consequences,” she said.

Peter Wolfang of the Family Institute of Connecticut, which is generally allied with the Family Research Council, took no position on the bill other than to question whether the practice was employed in the state and required a law.

He called the bill an example of the gay community “flexing its muscles.”