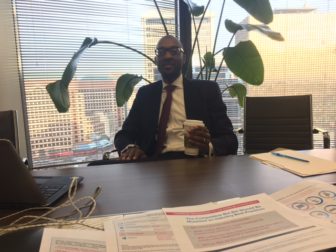 In a political consultant’s conference room on the 16th-floor of CityPlace II, an MGM Resorts International executive named Uri Clinton sipped a late-afternoon Starbucks coffee, still jet-lagged after his latest red-eye flight from Las Vegas to Hartford. In Clinton’s world, the action right now is in Connecticut’s capital.

Clinton visits Hartford so frequently these days that $83,395 of his salary is counted toward the $1.1 million MGM has reported spending so far on its campaign to stop the General Assembly from handing rights to develop Connecticut’s first commercial casino to the state’s two federally recognized tribes, the Mashantucket Pequot and Mohegan tribal nations.

MGM and the tribes go head to head today in a public hearing before the legislature’s Public Safety and Security Committee, which is considering two bills: One permitting the tribes to open an East Windsor casino to compete with the MGM resort scheduled to open next year in Springfield; the other would open the state to competition.

The second bill is the result of MGM’s push to not only stop the no-bid award of rights for the tribes to open a competing casino in East Windsor, nearly on the doorstep of MGM Springfield, but for Connecticut to reconsider opening Fairfield County for MGM and other commercial gaming companies to compete for rights to develop a major casino resort.

It was a pitch made two decades ago by Steve Wynn and Donald J. Trump, who saw the state’s southwest corner as the place for the first gambling resort in the metropolitan New York market. In the years since, New York has allowed “racinos” at Yonkers and Aqueduct that offer video gambling, but not a full-service casino with table games.

“Connecticut has the only game in town for the type of resort that MGM builds,” said Clinton, the lead attorney for MGM’s global development arm. “The opportunity to tap into New York, that’s appealing, not just for MGM, but for any of the major players.”

Gov. Lowell P. Weicker Jr., an opponent of expanding gambling, seemed to forever slam the door shut on more casinos by cutting a deal with the tribes that gave them exclusive rights to slot machines in Connecticut in return for 25 percent of the gross revenues.

By 2007, the deal was producing more than $400 million annually for Connecticut, a prohibitive price any commercial casino would have to guarantee matching if the gaming industry could entice the state to expand gaming beyond the tribal casinos, Foxwoods and Mohegan Sun.

With the recession and competition, the deal now produces less than $270 million — and MGM suggests the state might do better with new competition.

To promote their project, the tribes released a rendering Wednesday of the East Windsor casino.

MGM is unlikely to prevail, at least in a bid to open Fairfield County to casino gambling.

Gov. Dannel P. Malloy, who had steered clear of the casino debate, said Wednesday that opening Connecticut to competition for a commercial casino in Fairfield County to access the New York market is a major public policy decision that the legislature could not adequately address in its 2017 session.

“I don’t think that question has been appropriately raised and put before the legislature, and we’re now in March,” Malloy said. The annual session ends at the beginning of June.

“We appreciate the governor’s comments,” said Andrew Doba, a spokesman for the tribes. “It’s clear that more and more people understand both the game that MGM is playing and what’s at stake for the state.”

“I have great respect for the governor,” Clinton said. But he added, “If the state makes a decision to have a commercial casino industry, they ought to have a competitive process that allows them to get the full benefit.”

If Malloy is unwilling to embrace opening the state to competition, he also has a major concern about granting the tribes the right to jointly operate a commercial casino in East Windsor: Would that jeopardize the slots revenue that still goes to the state?

MGM played to that concern this week with a letter solicited from Kenneth Salazar, a former Democratic U.S. senator and Colorado attorney general who oversaw the Bureau of Indian Affairs as interior secretary for five years during the Obama administration.

Salazar warned that the Bureau of Indian Affairs would have to review and approve not only the East Windsor deal, but the existing agreements that call for sharing 25 percent of slots revenue with the state. He said the BIA, which has a fiduciary responsibility to protect the tribes, might reject the 25 percent share as too generous — as it has in other states.

The tribes are expected to counter Salazar’s letter with testimony from a former Bureau of Indian Affairs official who will say the East Windsor deal would pass muster at the BIA, Doba said. The agency gave the tribes a similar assessment in a non-binding technical assistance letter last year, before the change in presidential administrations.

Malloy dismissed Salazar’s letter — “I’m sure Ken wouldn’t have written that letter unless he was being paid for it” — but not the danger of losing the slots revenue. He has asked Attorney General George Jepsen for a formal opinion on the risk to the revenue sharing and the state’s risk of losing MGM’s legal challenge to giving the tribes rights to a third casino without open competition.

“One of the reasons I’m asking the attorney general for his opinion, I’m the unlucky governor whose had to live through about $150 million in revenue disappearing,” Malloy said of the falling slots payments. “I think we also have to be careful not to give away another $250 million in revenue.”

House Speaker Joe Aresimowicz, D-Berlin, said Wednesday that Jepsen’s opinion will be crucial. Litigation and other concerns raised by Jepsen in 2015 effectively killed chances for passage then.

“I’m reserving judgment until I see what the AG’s office says. That’s really going to be the determinant factor in this whole equation,” he said.

Jepsen’s office hopes to produce the opinion before the Public Safety and Security Committee votes on the bills next week.

The tribes also have reported spending nearly $1 million on lobbyists and consultants who represent the individual tribes and their joint venture, MMCT. Doba, the spokesman for the tribes, is the governor’s former communication director.

To make its case, MGM is lobbying inside the State Capitol and Legislative Office Building, where it has retained two lobbying firms. But the lobbying in part of a larger campaign coordinated at the CityPlace offices of the Global Strategy Group, a firm that does polling, marketing and manages political campaigns.

Its former political clients include Malloy, and one of its principals is Roy Occhiogrosso, formerly the governor’s top political adviser. MGM has reported paying $221,195 to Global and $139,167 to Grossman Heinz, another political consultant whose principal used to be the political director of the Democratic Senatorial Campaign Committee.

Clinton said MGM, as an outsider coming onto the home turf of the tribes, has had to be more creative in its campaign to get the General Assembly to consider an open process, such as the one used by Massachusetts when it sought bids after deciding to allow as many as three major casino resorts.

Mohegan Sun was one of the bidders, proposing a casino in Palmer, Mass., just off the Mass Pike, and in Revere, just outside Boston. It failed on both bids, but Clinton said the effort shows it was willing itself to compete in Massachusetts for part of the Connecticut market, just as MGM is doing in Springfield.