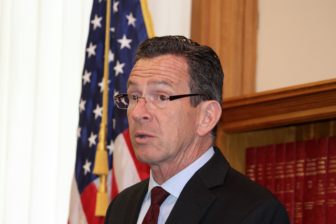 The House Republican proposal to replace the federal health law could cost the state $89 million to $539 million in 2020, the year many of the major provisions would take effect, according to an analysis released by Gov. Dannel P. Malloy’s administration Monday.

The administration also estimated that 34,000 people who buy health plans through the state’s health insurance exchange would not renew their coverage for 2018 if the proposal becomes law.

“This proposed law would result in a tremendous cost shift to the states once fully implemented, which could cost upwards of $1 billion per year when fully implemented after 2020,” said the analysis, prepared by the Office of Policy and Management, Malloy’s budget office.

The biggest cost, estimated at between $50 million and $450 million, would come from changing the way Medicaid is funded. In the current open-ended system, the federal government reimburses the state for a percentage of what it spends. Under the American Health Care Act, the GOP proposal, states would instead receive a set amount per Medicaid client from which to pay for coverage. That would take effect in 2020.

The amount Connecticut would receive in per-person funding would be based on 2016 spending, adjusted based on a measure of medical inflation. The exact amounts are not clear yet.

“The proposal to cap federal payments will force Connecticut and all states to either (1) pick up the costs, (2) significantly limit benefits, (3) reduce the number of people served, or (4) reduce rates to providers, while also making states vulnerable to arbitrary reductions in federal spending going forward,” the analysis said.

Separately, the administration estimated, the state would lose $30 million to $80 million in reduced payments for Medicaid clients who became eligible because of the Affordable Care Act, the health law commonly known as Obamacare. Under the current law, Connecticut receives federal reimbursement for 90 percent of the cost of covering those clients, who are low-income adults without minor children. As of January, just over 217,066 people were covered under that category.

The Republican plan would allow the state to continue receiving the same level of funding for any of those clients who are covered as of the end of 2019, but would reduce the amount paid for people in that category who sign up after the start of 2020, as well as any who lose coverage and then re-enroll.

In 2020, the state also would lose an estimated $3 million from reduced payments for the Community First Choice program, a Medicaid provision that provides coverage for home care, and an estimated $6 million from the repeal of a fund used for prevention and public health.

The analysis does not include funding Connecticut could receive under the GOP proposal to stabilize the insurance market. The bill calls for creating a fund with $15 billion nationally each year in 2018 and 2019, and $10 billion per year from 2020 through 2026.

The American Health Care Act also calls for changes to financial assistance available to help people buy private insurance through the individual market. Under Obamacare, subsidies are set so that people would not have to pay more than a certain percentage of their income to buy a midlevel plan (the exact percentage is based on their income). Under the House Republican proposal, people would receive a set amount of money regardless of the cost of health insurance; the amount would be based on their age and income.

In Connecticut’s exchange, Access Health CT, approximately 85,000 of the 111,500 customers currently receive federal subsidies to discount coverage. The Malloy administration analysis projects the average customer would receive $2,155 less in assistance in 2020 under the GOP proposal. Those over 60 would see a drop of $4,799.

In addition, approximately half of the exchange’s current customers have income low enough that their cost-sharing – such as deductibles and copayments – are lowered by additional federal subsidies. The Republican proposal would eliminate those subsidies.

“Based on customer feedback, we are projecting that more than 34,000 customers will not renew coverage in 2018 if this law went into effect,” the analysis said.

The Republican proposal calls for eliminating the mandate that nearly all Americans have coverage, a provision that would take effect as soon as the plan becomes law. Instead, people who buy insurance after having a gap in coverage would have to pay an extra 30 percent in premiums for one year.

“Without a mandate, I’m not sure how a carrier can charge enough,” Wadleigh said. “Some carriers are already starting to say 30, 40, 50 percent rate increases without a mandate.”

In a statement, Malloy, a Democrat, said the Republican proposal would increase costs, threaten coverage and limit care.

“Trumpcare will end up costing Americans more money for their healthcare while providing people with fewer benefits,” he said. “Healthcare coverage for some of our most vulnerable populations will be threatened, including seniors, persons with disabilities, children, and low-income adults.  We will see premiums and costs on older people increase, and millions of Americans with pre-existing conditions will no longer be able get affordable coverage.”

Related: What the GOP Obamacare replacement bill means for you and CT