Snow storm distracts from politics — but only briefly

Nothing like a blizzard to take the state’s mind off Donald Trump’s activities … for a day.

Last Monday the long-awaited Congressional Budget Office analysis of the new health insurance bill brought the responses everyone had predicted. Democrats said the projected 24 million increase in  the number of uninsured Americans by 2026  would “destroy America’s health care system;” and Republicans, while agreeing with some of the 37-page CBO report’s numbers, said Americans now forced to buy Obamacare would eventually be able to buy something else with lower premiums in the future, more open market. (Later in the week, as the analysis and politicking evolved on both the left and right, changes in the American Health Care Act appeared to be likely.)

In any event, Gov. Dannel Malloy’s administration did its own analysis and concluded, “This proposed law would result in a tremendous cost shift to the states once fully implemented, which could cost upwards of $1 billion per year when fully implemented after 2020.”

The governor – and a lot of the state government — then turned its attention to the Nor’easter bearing down on the eastern seaboard.

Anticipating a blizzard, state legislators postponed an important committee vote on whether to allow the construction in East Windsor of Connecticut’s third casino by Foxwoods Resort and the Mohegan Sun. Only hours before they had been advised by Attorney General George Jepsen that such an expansion off tribal lands – the state’s first – could put at risk some $250 million in slot machine revenue the tribes currently share with the state. 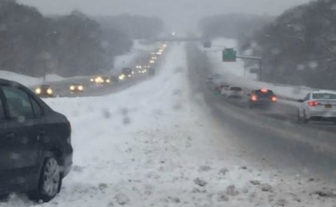 Tuesday, Connecticut mainly took a snow day. The governor’s decision to close state highways for about 12 hours brought routine business to a standstill and even distracted the media slightly from its outpouring of Washington news.

By Wednesday, however, with the plowing abated and the storm safely in the past, the burners went back on. The proposal to expand casino gambling passed muster with the legislature’s Public Safety and Security Committee, not because it approved of the idea, but because it was too big an issue to let die in committee.

Back in Washington, almost everything again revolved around the ideas, activities and impact of the nation’s chief executive.

On the left, Connecticut Sen. Chris Murphy announced that an unprecedented number of financial contributions to his re-election next year signaled a “fledgling progressive resistance movement” against the Trump administration and Republican majority in Congress.

In Connecticut, there was fear and loathing over the administration’s proposals to budget billions less in federal support for education, after-school care, environmental protection, heating subsidies, housing the homeless and a list of other domestic programs. Trump’s plan – termed an “utter disaster” for Connecticut by Murphy – would have a profound negative impact on the state’s efforts to keep its water and air clean and in its ability to respond to climate change, state environmental officials said.

There are also concerns about federal cuts to the state’s food stamp program.

The state’s schools also would take a hit under Trump’s proposal to reduce education funding by 14 percent – a move that would undermine a number of programs for thousands of Connecticut children. There would, however, be more money for the expansion of nontraditional public schools, but no negative effect on the so-called Title 1 grant – the state’s largest source of federal education funding. 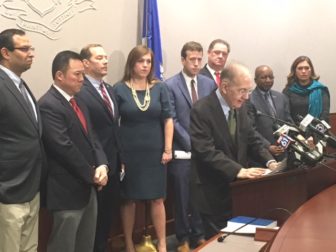 For now, the only apparent big Connecticut winners in the money tug-of-war would be the makers of war machinery. The president’s 2018 budget proposes an increase in defense spending, and he also is asking Congress for an additional $30 billion in 2017  – partly to buy more F-35 fighter aircraft and Sikorsky Black Hawk helicopters.

Certainly the  president’s revised travel ban – blocked late Wednesday by a federal judge in Hawaii – continues to be on state residents’ minds. On Thursday Blumenthal stood with fellow Democrats and members of the Council on American-Islamic Relations to condemn the ban as anti-Muslim bigotry; while state legislators – concerned about a big upswing in hate crimes against both Muslims and Jews– called for expanding Connecticut’s hate crimes law.

Local Republicans – who were not invited to the Thursday press conference – complained about the exclusion. Said GOP leader Sen. Len Fasano: “Instead of working with Republicans to show a united front against hate crimes in our state, Democrats chose political theater.”

Republican lawmakers were apparently not thrilled, either, by a move to restore highway tolls in Connecticut for the first time since 1985. They did not support the measure in committee as it narrowly won approval to move forward through the law-making process.