Lawmakers set aside partisanship to back bioscience industry 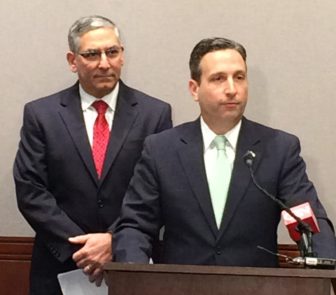 While partisan politics has bogged down many state legislative debates, Democratic and Republican leaders announced Tuesday they can agree on how to better support and plan the growth of Connecticut’s bioscience industry.

Top leaders in the Senate and on the Commerce Committee highlighted three bills that develop a strategy to elevate Connecticut to a national leader in biomedical research.

“Connecticut is locked in a global competition to create good-paying jobs and support high-growth industries,” Senate Majority Leader Bob Duff, D-Norwalk, said. “… Connecticut possesses all of the ingredients to capitalize on the exponential growth that is set to occur in precision medicine and biomedical research.”

“We have an incredible workforce in our state and Connecticut should always be looking at new ways to support those workers and to grow new job opportunities,” said Senate Republican President Pro Tem Len Fasano of North Haven. “Proposals to bring to light more information and oversight are certainly ideas that lawmakers on both sides of the aisle can come together on.”

All three of the bills highlighted Tuesday passed with strong bipartisan support on the Commerce Committee. That was aided by the fact that none of them require major state expenditures.

“This is low-cost/no-cost,” said Sen. Joan Hartley of Waterbury, the Senate Democratic chair on the committee.

One measure requires Connecticut to evaluate and strengthen its workforce to better meet the needs of the bioscience and precision medicine sector.

Lawmakers said the demand for these jobs is growing at: The Yale Center for Genomic Analysis in New Haven; The Jackson Laboratory and the University of Connecticut Health Center, both in Farmington; Mount Sinai Genetic Testing Laboratory in Branford; and at hospitals and insurance companies statewide.

A second measure would establish criteria and metrics to determine the effectiveness of state dollars used to support this sector of the economy.

And the third would provide for the continued work of the Connecticut Health Data Collaborative. This network of public and private groups was created by legislation last year to strengthen links between existing institutions in the state. It outlined goals including establishing a Connecticut Center for Genomic Medicine, establishing a more formal way to coordinate efforts and foster public-private partnerships, and identifying and addressing workforce gaps and needs.