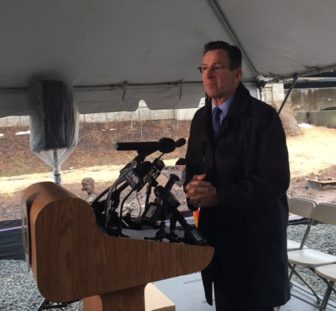 Gov. Dannel P. Malloy said Tuesday he is confident that Connecticut’s state government is compliant with U.S. immigration law and is in no danger of losing federal law enforcement grants over his differences with the Trump administration.

“We meet the standards with respect to cooperation, with respect to [detaining] serious…felonious individuals, so I don’t have any worries about our state status or statutes,” Malloy said after an event marking the second anniversary of CTfastrak. “We’ll monitor what’s going on with the local governments.”

Malloy was responding to questions about a threat Monday from U.S. Attorney General Jeff Sessions to strip so-called “sanctuary cities” of federal law enforcement grants if they do not comply with a law that prohibits the blocking of information about a person’s immigration or citizenship status.

The relevant law says, “no person or agency may prohibit, or in any way restrict, a federal, state or local government entity” from exchanging information with the federal immigration enforcement agency or any other local, state or federal government agency.

Malloy said the state complies with that federal law, which he says is not in conflict with a state law passed in 2013 that restricts law enforcement from holding someone for Immigration and Customs Enforcement (ICE) on a civil detainer.

“We’ll communicate,” Malloy said. “We’ll act when appropriate under our statute, and I’m very happy we have that statute in place.”

The state law says, “No law enforcement officer who receives a civil immigration detainer with respect to an individual who is in the custody of the law enforcement officer shall detain such individual pursuant to such civil immigration detainer” unless the individual has been convicted of a felony, is wanted for a felony, is a gang member or suspected terrorist, a public safety threat or is subject to final deportation order.