Economist Perna: Connecticut’s budget in ‘a state of emergency’ 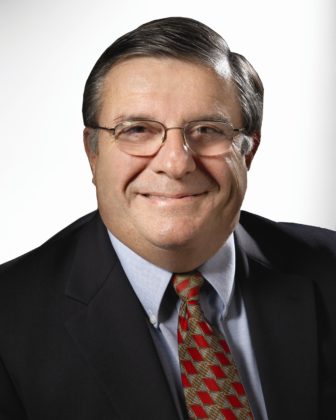 Nicholas S. Perna has been one of the most influential economists in Connecticut for more than three decades.

Retiring in January after 15 years as economic advisor to Webster Bank, Perna has been a consultant to numerous other leading financial institutions, including Fleet Financial Group and the Federal Reserve Bank of New York.

A former member of the President’s Council of Economic Advisers in Washington, Perna also was tapped in 1991 by Gov. Lowell P. Weicker to serve on a state economic research panel of academic and business experts.

He spoke to the Mirror recently about the state of Connecticut’s economy and its economic future.

The Dow Jones Industrial Average suffered its worst week in March since the fall of 2016. After eight years of recovery — albeit a modest one — is the nation’s economy, and Connecticut’s, closer to the next recession than it is to the next boom period?

That’s a really interesting question. Even with the declines that it’s had, the Dow [Jones Industrial Average] is still pretty much ahead of last year’s level, well ahead.

It’s not really a good harbinger — unless we’re talking about a huge decline — of impending doom.

I think the stock market’s retreat has more to do with President Trump’s problems and how what is near and dear to the market hasn’t happened yet: corporate tax cuts and more infrastructure spending.

But we’ve been barely growing, inching along in Connecticut. We’ve been lagging [the nation] big time, so it wouldn’t take a lot to push Connecticut’s job growth into negative territory this year.

Connecticut ranks high among states in median household income but still hasn’t recovered all of the jobs it lost in The Great Recession. And it has a daunting series of obstacles hindering that growth:

While none of these challenges is small, which poses the greatest concern?

There’s no doubt in my mind that the last on your list should be the first on our minds. It is the key behind present and future deficits. 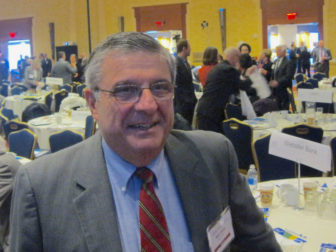 Deficits are not just corrosive to confidence in the business climate, but eliminating them through taxes or spending cuts is a drag on the economy.

It comes down to how do you follow short-term pain with longer-term gain? So far the state has been very inept at doing that.

Very little has been done about this problem over the last half-dozen years. We need to look to roll back existing benefits. Rhode Island rolled back cost-of-living allowances to state retirement beneficiaries.

But Rhode Island had more legal flexibility while Connecticut guarantees the overwhelming bulk of its public-sector retirement benefits by contract.

I understand there is a different legal set up, but all of that stuff that is sacrosanct should not be sacrosanct.

We also have a lot of duplication. We’ve got a boatload of state college and community college and University of Connecticut campuses, all of which require lots of well paid administrators. … If this was a business it would not be run like that.

I don’t want to hear that it’s not possible. If we have the courage and the foresight to deal with it, it can be dealt with.

If we didn’t have the obstacle (of current and future projected deficits), we could do better with jobs, we’d have a faster-growing population, we could invest in an updated infrastructure.

In economics, so many things are interrelated.

The financial services and insurance industries absorbed major losses during the last recession, while the recovery has been marked chiefly by growth in the much-lower-paying retail and services sectors. What strategy should Connecticut be pursuing to grow higher-paying jobs here?

It’s hard to address it directly. We do try lure companies to the state by incentives and keep them here by incentives. But you can’t compete with Boston or Massachusetts with that alone.

One of the many reasons we have to go after companies is because we drive companies out.

If you grant that, then it’s going to be a tough road to hoe in Connecticut job-wise, for years to come. All the latest legislature did, vis a vis the [state employee] pension liability, was spread it out over a number of years, reduce the peak but increase the overall cost. It  kicked the can down the road and made it bigger.

How much damage did GE’s announcement last year that it would move its headquarters to Boston do to Connecticut’s business image?

What did we lose?

I don’t think there was a development director in any state or town outside of Connecticut who didn’t drool at our ineptness to deal with the problem. … It was sad to see what was going on.

Even more important than that was the fact that we brought this about with punitive tax legislation.

I think what this calls for, in a sense, is the recognition this is a state of emergency. It can’t be business as usual. Drastic measures have to be taken.

Some say if those incentives — such as the $85 million provided to two hedge funds over the past year — aren’t provided, Connecticut will lose more companies.

It’s not sustainable politically, I think.

If I were a rank-and-file state worker, or a rank-and-file taxpayer — which I am — it kind of gets my dander up to subsidize an industry that’s subsidized even more at the federal level by being taxed on their carried interest.

Despite Connecticut’s reputation as a high-tax state, some point to a study prepared annually for the Council on State Taxation by Ernst & Young. This report, which measures state and local taxes as a share of gross state product, finds Connecticut to have one of the most favorable business tax climates in the country. Is there merit to this sort of ranking system?

I think there is. But I think that a couple of things are important to remember.

It’s not just the level of taxes that are of concern vis a vis the business climate of the state, it’s the gross uncertainty around these taxes that has been with us, particularly over the last half-dozen years. A company like GE or any large company doesn’t know if they’re going to get something big thrown at them or not.

If you were to rank states on anxiety generated by the state budget process, I’m sure we’d rank near the top.

But I also think there is another point to be made. (The Ernst and Young study) doesn’t reflect the full picture of cost. There is the horrendous cost of energy in the state. I don’t know how you measure regulatory burden, but if you’re a large company pondering locating in the Northeast you look at all of these things.

Still, if you have a product or a service that can command large (profit) margins in Connecticut, that could swamp the negative effect of taxes.

If you were to rank states on anxiety generated by the state budget process, I’m sure we’d rank near the top.

The business community keeps pressing legislators to keep state and municipal taxes flat, insisting this is a prerequisite to any economic growth. But surging fixed costs alone are projected to mandate frequent spending increases over the next 15 to 20 years. Can our economy grow if we are forced, out of contractual obligation, to raise taxes every two-year budget cycle over the next decade or two?

It’s a gamble I wouldn’t be willing to take. I think it runs the risk of leaving us in a worse situation in 10 years. You and I could be having the same conversation a decade from now.

I think what this calls for, in a sense, is the recognition this is a state emergency. It can’t be business as usual. Drastic measures have to be taken.

I threw out a number of ideas a few years back.

Number one was to have sunset provisions on all major legislation so we have to revisit them.

Another thing is having an independent body to review legislation for its economic impact, whether it is tax legislation, spending, or for that matter, casino construction legislation.

This Q & A has been edited for length and clarity.