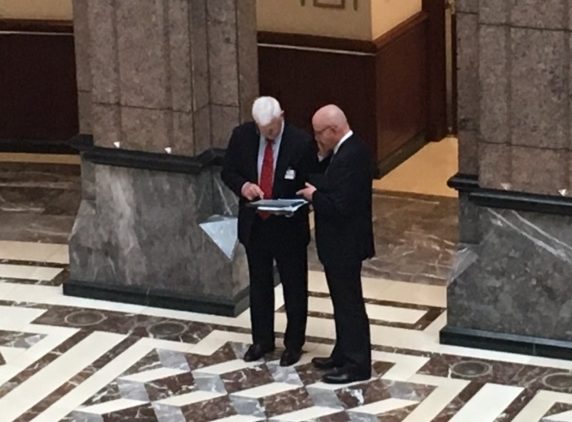 Jay Malcynsky, left, a lobbyist for the bail industry, and Michael P. Lawlor, an adviser to the governor, reviewing bail language.

A compromise version of bail reforms sought by Gov. Dannel P. Malloy and recommended by the Connecticut Sentencing Commission were approved Tuesday evening and sent to the House floor by the Judiciary Committee after a day of negotiations.

The revised bill is a step toward limiting the number of defendants who are jailed awaiting trial because of their inability to afford a relatively modest bail or the services of a bail agent, but falls short of the governor’s goal of eliminating the need for a for-profit bail industry in Connecticut.

“Across the nation, courts are ruling that the current system of bail is unconstitutional,” Malloy said. “Today’s vote by the Judiciary Committee is the first step in correcting Connecticut’s bail system and moving toward a more just and equitable procedure by taking into account public safety risk rather than a defendant’s ability to pay. Being poor should never be a crime, and this bill is a start to fixing a current system that penalizes poverty.

Michale P. Lawlor, who was the Judiciary Committee co-chair until joining the administration as the governor’s criminal justice adviser in 2011, huddled frequently throughout the day with lobbyists for the influential bail industry. By the end of the day, the industry dropped its opposition.

The compromise would bar judges from imposing cash-only bail, a practice that effectively denies bail to hundreds of indigent and moderate-income defendants. Lawlor said 558 defendants are currently incarcerated on a cash-only bails.

The measure also restricts judges from setting bail in most misdemeanor cases, unless the charges stem from family violence or the judge finds the defendant is a flight risk based on factors such as a previous record of failing to appear in court.

A provision that could have put bail bond agents out of business was struck from the bill. It would have required judges to allow defendants to go free after posting 10 percent of the bail set by a court, putting the state in competition with bond agents.

The 10 percent fee, which is roughly the same as the non-refundable fees charged by bond agents, would have been returned by the state to defendants who appeared for their court appearances.

The bill authorizes a study sought by the bail industry on the practicality of imposing a surcharge on bond agents’ clients to help indigent defendants.

The committee approved the bill on a 23-15 vote that largely broke along party lines, with Democrats in support and most Republicans in opposition. Notable exceptions included the committee’s GOP leaders, Sen. John Kissel of Enfield, a co-chair, and Rep. Rosa C. Rebimbas of Naugatuck, the ranking House Republican.

The reforms found support on the left from the American Civil Liberties Union and on the right from the conservative Yankee Institute for Public Policy.

The Judiciary Committee faces a deadline of Friday for acting on bills still before the panel.

In other action Tuesday, the panel approved legislation that would: