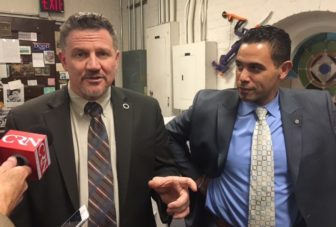 The Mashantucket Pequot and Mohegan tribal nations made a lobbying blitz Thursday in the hopes of improving their odds of winning authorization to jointly develop Connecticut’s first casino off tribal lands.

But one important oddsmaker — House Speaker Joe Aresimowicz, D-Berlin — said after his meeting with the tribal chairmen, their lobbyists and lawyer that chances of passage in the final nine weeks of the 2017 session remain no better than 50-50.

In a letter hand-delivered in a series of meetings, the tribes promised to continue sharing slots revenue under a longstanding deal that gives their tribal casinos, Foxwoods and Mohegan Sun, exclusive casino gaming rights in return for sharing 25 percent of gross slots revenue with the state.

The deal produces more than $260 million annually for the state, revenue that Aresimowicz says he and other legislators are loathe to risk. He called the letter “helpful,” but doubted it materially changed anything.

“I still think it’s a 50-50 proposition,” said Aresimowicz, the top leader in the House. “There’s a lot of other questions that need to be answered.”

Most of those questions were raised by Attorney General George Jepsen in a letter when the tribes originally sought permission for a third casino in 2015, and again this year in a formal legal opinion sought by Gov. Dannel P. Malloy.

The opinion warned there was no certainty the Bureau of Indian Affairs would approve modifications to the tribes’ deal with the state — or even allow the 25-percent revenue sharing to stand. He also warned that awarding the tribes rights to what would be the state’s first commercial casino without open competition might be illegal. 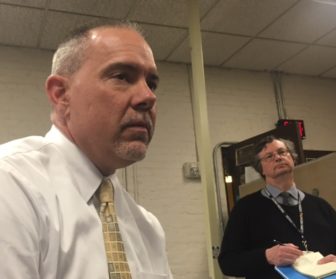 To protect the market for the casino resort it is building just over the state line in Springfield, MGM Resorts International has lobbied heavily to kill the bill sought by the tribes — and promised to continue litigation challenging any closed process as a violation of the equal protection and commerce clauses of the U.S. Constitution.

In a letter addressed to Gov. Dannel P. Malloy, Jepsen and legislative leaders, the tribes’ chairmen said Senate Bill 957, which would allow them to jointly build a casino in East Windsor to compete with MGM Springfield, is conditioned on the Bureau of Indian Affairs approving a continuation of revenue sharing.

“With the development of a third casino operated jointly by Mohegan and Pequot, we are committed to guaranteeing our existing slot revenue arrangement with the State and are proposing compact amendments that will ensure those revenue streams are preserved,” the tribes said. “SB 957 does not jeopardize this revenue sharing, because it is expressly conditioned on approval of the Tribes’ proposed compact amendments.”

The chairmen, Kevin Brown of the Mohegans and Rodney Butler of the Pequots, met in a series of meetings with Aresimowicz, House Minority Leader Themis Klarides, R-Derby; Senate Majority Leader Bob Duff, D-Norwalk; and other individual legislators.

Their last stop was in the Capitol press room, where Butler told reporters that 50-50 odds in the casino business were pretty good. Brown told them that failure to pass the expansion bill would produce a sure thing — lost jobs and revenues in the face of growing competition.

“Here’s what’s 100 percent certain: If we don’t do anything, Connecticut is going to lose 9,000 jobs and tens of millions of dollars in slots tax revenues,” Brown said. “What we are proposing can mitigate those losses.”

Brown and Butler said Bureau of Indian Affairs’ precedent indicates it is unlikely to interfere with a deal struck by the tribes with Connecticut.

“In the history of the BIA, they never have revoked a compact,” Butler said.

“There’s no news here,” Clinton said. “What the tribes are saying today is no different than what they’ve been saying for months – to which the Attorney General recently responded by saying that even if they try to amend the compact the Bureau of Indian Affairs could reject their request and nullify the entire compact.”

Clinton also suggested that lawmakers think about whether the tribes have the financial capability to build a new casino. The tribes, he said, “would need the approval of their bondholders to take on all this additional debt – and they’ve not even explained how or if they would be able to secure a letter of credit.”

Both tribes have substantial debt, and the Pequots defaulted on bond payments in 2009. In a deal reached with lenders in 2013, its $2.2 billion debt was reduced to $1.7 billion.