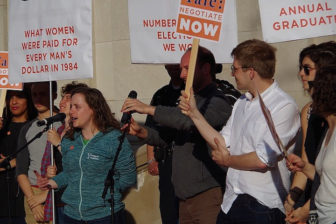 The union issued a similar demand a week earlier, setting Wednesday as the deadline. At that event, union representatives delivered a 10,000-plus signature petition for the union to Woodbridge Hall and demanded that the university enter negotiations by 5:30 p.m. on April 12. Of those 10,000 signatures, Local 33 Co-Chair Robin Canavan said, around 6,600 came from members of the New Haven community.

But the April 12 deadline passed with Yale refusing to begin negotiations. Instead, Yale has returned to the National Labor Relations Board (NLRB) to seek review of a ruling that allowed Local 33 to pursue it’s “micro-strategy” of representing just some departments, where it could win an election — not all 50 departments as a unit.

At Wednesday’s rally, union leaders promised to take “action” if Yale doesn’t meet a new deadline of April 25 to start negotiations. They didn’t elaborate on what kind of “action” that would entail, including whether that might mean a strike.

According to Yale, it’s still too early to start negotiations. After Local 33 gained a toehold in elections earlier this year, the university returned to the national arm of the NLRB to contest Local 33’s micro-unit strategy for a second time, a decision that is still pending. The university also has a hearing with the regional offices of the NLRB later this month to address several “challenge” ballots cast by graduate students who may not have been eligible to vote. Those ballots affected two of eight departments—Political Science and East Asian Languages & Literatures—at the time of the election. That hearing is scheduled for April 24 in Hartford.

In the meantime, Yale has called Local 33’s demands for negotiations “premature.”

“As a result of Local 33’s micro-unit strategy, approximately 90 percent of the 2,600 doctoral students in the Graduate School were not permitted to vote,” wrote Yale spokesman Thomas Conroy in a release Wednesday afternoon. “Yale is still engaged with Local 33 before the NLRB. The university respects the legal process for resolving labor issues while this case continues to move forward.”

Addressing the crowd, Canavan claimed that Yale is “delaying because they are hoping that President [Donald] Trump will appoint anti-labor representatives to the National Labor Relations Board” to rule against the union. Citing last week’s petition and a letter from Connecticut’s federal delegation in support of Local 33, she called on Yale to “respect the decisive outcome” of February’s NLRB-moderated election and enter negotiations with the departments of East Asian Languages & Literatures, English, Geology & Geophysics, History, History of Art, Mathematics, Political Science and Sociology.

As she ceded the mic to city labor advocates who have joined Local 33’s cause, a sea of orange signs bobbed across the plaza. Local 34 President Laurie Kennington pumped her fists in support, the crowd cheering wildly as she declared that Local 34 had also been a long fight (including a strike) to get Yale to the negotiating table after winning union recognition. “Disrespect to one union is disrespect to all unions!” she said. Local 35 Steward Tyisha Walker also sought to put the university on notice, calling the failure to negotiate reminiscent of the university’s long battle with its oldest union.

“If you don’t sit down and negotiate, we’re gonna have a problem,” she said. “Stop being a coward.”

Echoing Local 33 President Aaron Greenberg’s comment that “when we won, we won the right to sit down” and negotiate, Canavan also gave the university a new deadline: April 25, one day after the challenge ballot hearing is set to begin in Hartford. If the university “does not come to the table” by that date, she said, grad students “will act.”

Asked to clarify her statement after the rally, she said that, “I just think we will keep insisting that they will come negotiate. It’s really on them.”

“We will act,” added Greenberg. “What that looks like — we’ll see.” Neither he nor Canavan would comment of whether graduate students would consider a strike.

Speaking with the Independent after the rally, Conroy dismissed the claim that the university is waiting on new Trump appointees to sway the NLRB. “The university has maintained a position for decades that it’s not in the best interest of the grad students [to unionize],” he said. “We have steadfastly held that position when the White House was occupied by both major parties.”

“We don’t know what the NLRB will say, but we certainly do not believe that we cannot prevail,” he added.

This article was first published by the New Haven Independent on April 13.