Harris first to explore run for governor since Malloy exit 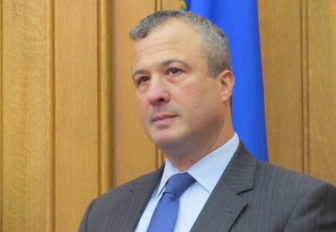 Jonathan Harris, who resigned Monday as commissioner of consumer protection, intends Wednesday to become the first Democrat to open an exploratory committee for governor since Gov. Dannel P. Malloy announced last week that he would not seek a third term in 2018.

Harris, 53, a former West Hartford mayor, state senator and executive director of the Democratic Party, said in an interview Tuesday he will file papers to become the second Democrat after Middletown Mayor Dan Drew to open an exploratory.

He will not be the last: Comptroller Kevin P. Lembo is seen as likely to make a similar move in coming weeks, though, like Harris, he would defer to Lt. Gov. Nancy Wyman should she decide to seek the Democratic nomination for governor.

Wyman is expected by friends to take up to a month to decide if she wants to run.

“If she runs, I will not run for governor. I will be there. I will support her. I will help her,” Harris said.

Lembo, who says he is giving a run for governor “strong consideration, said he would not compete with Wyman, who was his boss when he was a deputy in the comptroller’s office.

With the exception of Drew, who has raised $106,000 and spent $73,000 since creating his exploratory committee on Jan. 12, Democratic contenders gave Malloy time to exit the race on his own schedule.

The governor’s early decision is a recognition of how Connecticut’s public financing program has changed politics: To qualify, a candidate must raise $250,000, accepting contributions of no more than $100.

“I do think the governor’s announcement last week will set off a chain reaction,” Roy Occhiogrosso, a former Malloy adviser, said earlier Tuesday.

By day’s end, Harris had gone public with his plans.

Chris Mattei, a former assistant U.S. attorney who successfully prosecuted former Gov. John G. Rowland in 2014 for conspiring with a congressional candidate to violate campaign finance laws, has been gauging support for his own run. Friends of state Sen. Ted Kennedy Jr., D-Branford, said Tuesday he also is still considering a run.

Harris said his strength as a candidate is a record of solving problems as a local mayor, a state senator and a commissioner whose purview included overseeing Connecticut’s medical marijuana program.

“I’m going to talk about all the positive things I’ve had the privilege of working with people on, going back to the days I was was mayor of West Hartford,” Harris said.

Those accomplishments, he said, include the bipartisan passage of a public-private partnership that led to Blue Back Square, a widely praised mixed-use project that brought new retail, housing and office space to West Hartford center.

As a state senator, he played a leading role in passage of a law requiring hospitals to provide rape victims with access to the emergency contraception drug, Plan B.

“In my experience, good policy tends to make good politics,” he said.

Harris, like several other potential Democratic candidates, can expect Republicans to tag him as a close associate of Malloy, one of the nation’s least popular governors.

Not only was Harris a member of the Malloy administration, he helped the governor’s re-election in 2014 as the executive director of the state Democratic Party. He held the post when the party was accused of fundraising violations.

The party eventually agreed to resolve the complaint with a $325,000 settlement.

Meanwhile, state Rep. Matt Lesser, D-Middletown, announced Tuesday he is forming an exploratory committee for a possible race for secretary of the state.

Secretary of the State Denise Merrill, a Democrat, said she is considering seeking a third term.