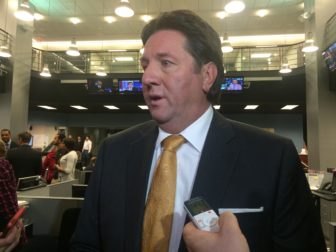 Joe Visconti after a TV debate with Gov. Dannel P. Malloy in 2014.

Visconti, 60, a former one-term West Hartford councilman with a flair for self-promotion and the use of social media, said he intends to ignore the Republican convention nomination process and instead qualify for the GOP primary by a petition drive.

“I am bypassing the convention and going straight to a primary,” said Visconti, who has embraced conservative populist causes in recent years ranging from the Tea Party to gun rights to the candidacy of Donald J. Trump. “All in all, I’m not seeking their nomination.”

Visconti never has demonstrated appeal as a statewide candidate, but he has the potential to shape the debate as a brash, theatrical politician willing do and say what others will not, mainly by launching a frontal assault on public-employee unions in Connecticut.

His standing among many party officials was reflected in the terse reaction of GOP Chairman J.R. Romano to his candidacy: “This is the greatest nation on earth. Anyone one can run for office. That’s pretty much it.”

The easiest and least-expensive way for a candidate with mainstream Republican or Democratic support to qualify for a primary is to seek the support of 15 percent of the delegates to one of the major-parties’ state nominating conventions.

The alternative is to gather signatures from 2 percent of party members, which Viscontini estimates will require him to gain the support of at least 8,900 Republicans in 2018. 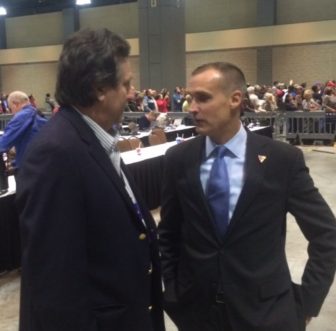 In 2014, Visconti got only 1.76 percent of the convention vote, then failed to gather sufficient signatures of Republicans to qualify for a primary. But he successfully petitioned as an independent for a place on the November ballot, an easier task.

On the weekend before the election, Visconti ended his campaign and endorsed Republican Tom Foley over Gov. Dannel P. Malloy, the Democrat. Visconti remained on the ballot and drew 11,456 votes of the more than one million cast.

His plan for 2018 is to start next spring to gather signatures for a GOP primary and to begin now to qualify for public financing, which requires raising $250,000 in contributions of no more than $100 each.

Visconti, who has remained an unabashed supporter of Trump as the new president’s approval rating has plummeted, said he will try to tap into a network of Trump supporters for early donations.

Other Republicans to open a candidate committee for 2018 include Rep. Prasad Srinivasan of Glastonbury and Shelton Mayor Mark Lauretti.

House Minority Leader Themis Klarides, R-Derby, has been talking with friends about the possibility of entering the race and said Wednesday she is giving “serious consideration” to a campaign.

Democrats tried to portray Visconti as squarely in the GOP mainstream.

“The only difference between Visconti and his Republican rivals is that he’s slightly more vocal about his support for Donald Trump’s anti-Connecticut agenda,” said Michael Mandell, executive director of the Democratic Party. “But make no mistake, any one of the GOP candidates would be a rubber stamp for Trump’s backwards policies.”