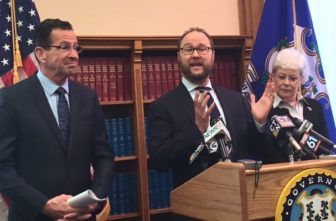 David Wilkinson speaks after the announcement of his appointment as commissioner of the Office of Early Childhood by Gov. Dannel P. Malloy.

Wilkinson, 39, who has Connecticut roots as a Yale Law School graduate and co-founder of a community development bank, directed the White House Office of Social Innovation and Civic Participation, a testing ground for programs that draw on public and private resources to promote upward economic mobility.

“I am thrilled he has agreed to take on this new responsibility,” Malloy said.

Wilkinson succeeds Myra Jones-Taylor, who left as the agency’s first commissioner on Sept. 1. Her deputy, Linda Goodman, has been acting commissioner. Wilkinson begins work on April 28 in a post that will pay him $142,000 annually.

The Office of Early Childhood was created in 2013 through an executive order and then elevated to a cabinet-level post by legislation in 2014 to coordinate a fractured delivery system in which five state agencies provided day-care, preschool, and other services.

“It is already a national model for how to better serve young children and their families,” Wilkinson said.

He comes with an elite educational background, holding degrees from Yale and the University of Virginia. But he also has direct experience as a recipient of public aid growing up in Richmond, Va., that makes him passionate about the mission of his new office.

“My mom was a teenage mom. She was a single mom. She worked long hours for low wages,” he said. “We often had unstable housing, and we relied on public support, including food stamps, as they were called at the time.”

“Luckily for me, she’s also a superhero,” he said, smiling. “She read to me religiously.”

Wilkinson said she also placed a premium on good, stable child care as she changed jobs. She also talked to him constantly, which helps brain development, he said.

“My mom’s a talker, and she talked to me constantly,” said Wilkinson, who displayed a loquaciousness Thursday.

“She gave that gift to you,” Malloy said to laughter.

Wilkinson arrives a week after Malloy confirmed he will not seek re-election in 2018, giving the administration 21 months until a new governor takes office in January 2019. He said he learned during that waning months of the Obama administration that much can be accomplished in 21 months.

His appointment was announced on the Early Childhood Alliance’s advocacy day, when families dependent on the office were lobbying in Hartford.

The alliance has been urging better funding for Care4Kids, a child-care subsidy program that has seen its waiting list swell to 3,400 families. Malloy has called for a curb on enrollment as the state tries to manage the program’s $33 million deficit.

New federal regulations put in place last year required Care4Kids to increase the program’s enrollment period to one year – up from eight months – while limiting paperwork for parents by reducing a number of stringent, meticulous reporting requirements to prove continuing eligibility. The reporting requirements often had tight deadlines for submitting information, and resulted in many families being kicked off the program even while they still qualified.

Wilkinson said the changes in federal emphasis were reasonable, but they did not come with additional resources, which he called his first and biggest challenge.

His previous White House jobs included being a senior policy advisor at the Office of Social Innovation and the Council on Environmental Quality. In the environmental job, he worked on ways to “market development, financial innovation and ladders to economic opportunity as they connect to infrastructure, water resources, climate resilience and renewable energy.”