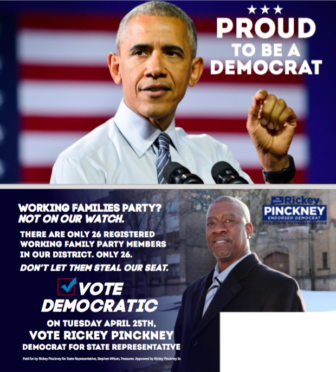 Two sides of a disputed campaign mailer in a race in which every candidate is a registered Democrat.

The campaign for a vacant state House seat in Hartford, where voters will be offered three flavors of Democrat in a special election Tuesday, has laid bare tensions between Democrats and the Working Families Party, a labor offshoot that fashions itself as the progressive conscience of Connecticut politics.

Every candidate on the ballot is a registered Democrat: Rickey Pinckney Sr., the party’s nominee; Joshua M. Hall, a teachers’ union official on the Working Families line; and Kenneth P. Green, a former state legislator trying to make a comeback as a petitioning candidate.

Pinckney’s campaign, which has the support of city and state Democratic leaders, hit hard at Hall with a mailer questioning the Democratic loyalties of a Hartford Federation of Teachers vice president who sought the Democratic nomination and was treasurer of the Democratic State Central Committee until he became a WFP candidate.

“Working Families Party? Not on our watch,” said a Pinckney mailer produced by the Vinci Group, one of the busiest Democratic campaign consultants in the state. “There are only 26 registered Working Families members in our district. Only 26. Don’t let them steal our seat.”

The flip side of the mailer is a picture of Barack Obama and the headline, “Proud to be a Democrat.”

The Working Families Party makes little effort to enroll party members. With rare exceptions, it has existed to push and prod Democrats, rewarding allies with cross-endorsements in general elections, backing progressives in Democratic primaries and, as is the case in the Hartford special election, occasionally directly opposing a Democratic nominee it finds wanting.

“Ultimately, we are an independent organization,” said Lindsay Farrell, the executive director of the WFP. “We feel, when the Democratic Party has gotten it wrong, we’ll do our own thing. This is one of those times. I can’t speak to whether or not that’s going to hurt our relationship. It’s up to them whether that hurts our relationship. That’s up to them.”

Questioning the Democratic bonafides of Hall is misleading, she said, given that all three candidates are registered Democrats who would be a member of the House Democratic caucus. Sen. Edwin A. Gomes, D-Bridgeport, won a special election on the WFP line, then resumed life as a Democrat in good standing.

The special election is one of two on Tuesday. Hartford voters will choose a successor to Douglas McCrory, a Democrat, who resigned from the House after winning a Senate seat. The second election will pick a successor to Republican Eric Berthel of Watertown, who also moved to the Senate.

“Democrats don’t own the seat. The voters own the seat,” Farrell said of the Hartford race. “The voters are allowed to make a choice about issues and the qualifications of the candidates.

Marc DiBella, the city’s Democratic chairman, said the WFP should not be surprised when Democrats defend their nominee as the only Democratic Party-backed candidate in the race. He said the mailer was accurate and reflects some of the frustration Democrats feel toward the Working Families.

They stress their Democratic relationships when it suits them, as it does in solidly Democratic Hartford, he said.

“They want to have their cake and eat it, too. There is that frustration. ‘You get to have it both ways,’ ” DiBella said. “There is some bad blood between the Working Families Party and the Democratic Party in Hartford — and some other places.”

The WFP and its labor backers opposed the budget deal crafted last year by Gov. Dannel P. Malloy and the legislature’s Democratic majority, who opted for spending cuts, including the elimination of jobs, instead of raising taxes on the wealthy as sought by labor and the WFP.

The Working Families targeted House Speaker J. Brendan Sharkey, D-Hamden, backing a liberal challenger for the Democratic nomination, Joshua Elliott. Sharkey ultimately didn’t seek re-election in 2016, sparing Democrats and the WFP a high-profile battle at a time when fractures are evident in the House Democratic caucus on the topic of taxes and spending.

Last year, Lori Pelletier, the president of the Connecticut AFL-CIO, also urged union members to boycott the Democrats’ annual fundraising dinner to protest the budget, and she led a demonstration outside the event. Pelletier later was snubbed when she sought a seat as a delegate to the Democratic National Convention.

Nick Balletto, the Democratic state chairman, recently acknowledged in an interview with CT Mirror that he refuses to recommend consultants who work on WFP campaigns to be hired by Democratic candidates.

Six years ago, the Working Families played a key role in electing Malloy, who supported the WFP’s call for a paid sick days law. The party organized for Malloy and gave him its cross endorsement.

Without the 26,308 votes cast for Malloy on the WFP line, the Democrat lost by nearly 20,000 votes to Republican Tom Foley. With those votes, Malloy won by 6,404 votes out of 1.1 million cast, the narrowest gubernatorial victory in Connecticut in 56 years.

Malloy delivered on his promise to pass a paid sick days law and also won passage of a $10.10 minimum wage, but he and the WFP have since parted ways over taxes.

To pass a budget this year, Democrats can ill-afford disunity. The Senate is evenly split, meaning Democrats’ only edge is the ability of Lt. Gov. Nancy Wyman to break ties as the presiding officer. The new House speaker, Joe Aresimowicz of Berlin, has the smallest working majority in the history of the House.

Democrats have a 78-71 advantage, with two vacancies. After two special elections Tuesday, the margin is likely to return to 79-72, the results of the November election. In a chamber where 76 votes is a majority, Aresimowicz can afford only three defections on the budget.

As much as any Democrat, Aresimowicz is in a position to feel the tensions over the budget between labor, including the Working Families, and caucus members who would prefer to avoid or at least minimize new taxes. He is employed by AFSCME, and his boss, Sal Luciano, was among the labor leaders unhappy with last year’s budget.

“I’m comfortable with the relationship I have with the Working Families, party based upon the issues they advocate for,” he said. “As far as candidates and getting state reps elected, I am the leader of the Democratic caucus of the House, and I am going to work with my Democratic members. We’ll let the WFP advocate on behalf of issues and candidates that support their issues, but that doesn’t necessarily mean that’s where I’m going to go.”

Differences with the Working Families can figuratively and literally take on aspects of a family fight in the House Democratic caucus. A reporter stopped Aresimowicz to talk about the WFP in the halls of the Capitol as he walked to a meeting with a top aide, Matthew Brokman.

Brokman is married to Farrell, the executive director of the Working Families. Brokman shrugged when asked about any awkwardness in the respective roles played by him and his wife.

“We don’t talk about everything,” Farrell said. “We have our own turf.”