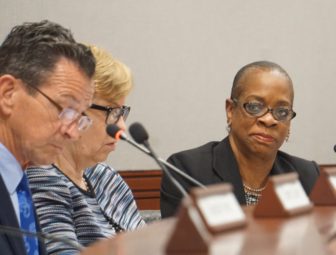 Treasurer Denise Nappier, right, at the Bond Commission on Friday.

Connecticut’s status on Wall Street took another hit Friday when a major credit rating agency downgraded the state’s bond rating — a move that could lead to higher borrowing costs.

The downgrade by Fitch Ratings Inc., from AA- to A+, comes about one month after Treasurer Denise L. Nappier warned the General Assembly to adopt a new approach to borrowing or risk slipping further in the credit rating.

It marks the fourth time Connecticut has faced a downgrade since May of last year. Fitch and S&P Global Ratings downgraded the state at that time, while Kroll Bond Rating Agency did so just two months later.

The fourth major rating agency, Moody’s Investors Service, hasn’t downgraded the state in recent years, but has given Connecticut a “negative” outlook, meaning its financed are being closely watched. Such outlooks often are a harbinger of a future downgrade.

Fitch cited “reduced expectations for economic and revenue performance” at a time when Connecticut’s income tax receipts are falling for the first time since the last recession.

“Despite a demonstrated commitment to identifying structural solutions to budget shortfalls, the state’s ability to manage is constrained by” large unfunded liabilities in its retirement benefit programs, the rating agency wrote in a statement. “The state remains pressured by revenue collections that are failing to keep pace with rising expenditures. … After addressing the newly forecast budget gap for the current year, the state will be left with no reserve cushion and more limited tools to address already projected budget shortfalls for coming years and the expected effects of future economic downturns.”

State government is expected to finish in deficit this fiscal year for the third year in a row. The shortfall is expected to drain most or all of the $236 million Connecticut has in its emergency reserve.

Gov. Dannel P. Malloy said earlier Friday during the State Bond Commission meeting that he believes Wall Street is growing impatient with the legislature’s failure to adopt a plan yet that closes a huge projected shortfall in the next state budget.

“Quite frankly they’re wondering why the legislature does not deal with the reality of the budget issues that are before it?” Malloy said. “I’m prepared to pass a budget on Monday or Tuesday or Wednesday.”

Analysts say finances, unless adjusted, will run as much as $2.3 billion in deficit next fiscal year and $2.8 billion in the red in 2018-19.

“The action by Fitch is disappointing, and should be taken extremely seriously as we chart a course on our next biennial budget,” Malloy spokesman Chris McClure said. “The only reasonable and responsible course of action is for Connecticut state government to immediately take the necessary steps to mitigate the current year deficit and then balance the biennial budget with recurring measures to reduce spending and structural solutions to our long term problems. The governor has proposed specific ways to do exactly these things.”

“This is more devastating, but not unexpected news for our state,” Senate Republican leader Len Fasano of North Haven said. “Beating up on this downgrade won’t solve the problem, but we also cannot ignore how serious this situation is. Lawmakers need to recognize that their policies have consequences and have created an environment that is now in desperate need of significant change. What is clear is that any biennial state budget for Connecticut cannot resemble the fiscal policies of years past.”

“It comes as no surprise that the market has reacted in such a definitive fashion, given the continued inability from the majority party Democrats to recognize the core issues: dwindling tax revenues to support ever increasing spending,” said House Minority Leader Themis Klarides, R-Derby. “We take no solace in this latest news, but the Republican budget response next week will address these issues.”

Meanwhile, Nappier asked lawmakers earlier this spring to consider a new approach to borrowing through which the state would pledge a portion of its income tax receipts.

“The state is under very significant macroeconomic pressures, and the continued revenue weaknesses that have strained our budgets need to be addressed in a meaningful, sustainable way,” Nappier said Friday. “I sincerely believe that the governor and members of the General Assembly appreciate the gravity of this situation, and will work with clear-eyed determination and unified commitment across the aisle to find ways to live within our means and stanch the deterioration of our credit rating.”

In turn, the General Fund draws resources from most state taxes — including its largest ones, like the income, sales and corporation levies — fees and fines, lottery and casino proceeds, and federal grants.

Instead of issuing general obligation bonds in the future, Nappier is asking lawmakers to consider “new credit bonds.”

Under this system, Connecticut would have to commit a specific portion of its income-tax stream to repay its bonds.