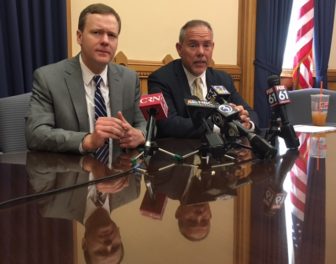 If the Mashantucket Pequot and Mohegan tribes want the House to join the Senate in granting them the right to build a casino off tribal lands, they must pay for the privilege and give Connecticut a measure of “budgetary relief,” House Democratic leaders said Wednesday.

The Senate bill imposes a 25-percent tax on gross gaming revenues, but no licensing fee or other upfront payments, a disappointment to House Democrats who were hoping for as much as $100 million in new gambling dollars to help balance the budget for the fiscal year that begins July 1.

House Speaker Joe Aresimowicz, D-Berlin, said a majority of House Democrats support the expansion of casino gambling, but they believe the state should extract a licensing fee from whomever is granted development rights, whether it is the tribes or their competitor, MGM Resorts International.

The Senate voted 24-12 early Wednesday for a bill permitting the tribes to jointly develop a commercial casino offI-91 in East Windsor to compete with the MGM casino under construction over the state line in Springfield. The Senate sees the project as blunting the loss of market share and stabilizing gaming revenue now collected by the state.

MGM says the state could do better with an open competition for the rights to a casino in Connecticut, especially if it considers a site in lower Fairfield County that could draw customers from metropolitan New York.

A complication is the agreement the state struck with the tribes in the 1990s: In return for exclusive rights to casino gambling for the tribal casinos, Foxwoods Resort and Mohegan Sun, the tribes pay the state 25 percent of their gross slots revenue, which is expected to generate $260 million for the state.

Gov. Dannel P. Malloy has threatened to veto an open-competition bill or any other measure he sees as costing the state $260 million. A crucial question facing the House: If they opt for an open competition, would the state lose its slots revenue upon passage — or only after a new casino is open and generating revenue for Connecticut?

“That is a great question,” Aresimowicz said. “And those are questions that some of our caucus members are asking now. We haven’t asked for an official opinion by the AG’s office, but we are in discussions with them.”

Attorney General George Jepsen warned in public-hearing testimony that an early version of the open-competition bill, if passed, could allow the tribes to immediately suspend payments to the state, but his office says revisions might allow the state to keep collecting its share of slots revenue while the state pursues an RFP process through the commissioner of consumer protection.

“Passage of the substitute bill that came out of committee likely would not jeopardize the agreements with the tribes, as the substitute bill simply empowers the commissioner to undertake an RFP and then report back to the General Assembly,” said Jaclyn Falkowski, a spokeswoman for Jepsen. “No casino is authorized under the bill that came out of committee.”