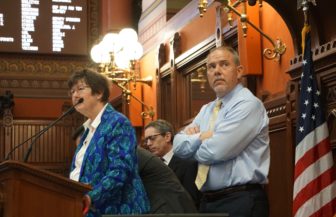 House Speaker Joe Aresimowicz glances at a tally board as a roll call is announced.

On a partisan vote of 79 to 70, the House of Representatives approved a bill Thursday that could test the limits of the states’ ability to regulate campaign finances in the post-Citizens United era by imposing rules intended to end the use of untraceable dark money in Connecticut elections.

Republicans opposed the reforms as insufficient, saying they fail to close loopholes that allow unlimited money to flow into publicly financed campaigns for state office, despite a promise by candidates participating in the voluntary program to abide by spending and contribution limits.

Democrats rejected a series of GOP amendments that would have closed avenues that now allow donors to funnel money into legislative and other state races, such as the ability of state parties to make unlimited expenditures on behalf of candidates.

“Why are we here dealing with campaign finance reform and we’re not addressing that issue? That is a glaring loophole in our supposedly clean election law and should be in this bill,” said Rep. Doug Dubitsky, R-Chaplin. “Its absence is very conspicuous in my eyes.”

Despite those limits, the bill is a major step toward stopping untraceable money in Connecticut elections, such as a mysterious $1.17 million donation from an Ohio group that paid for ads attacking Gov. Dannel P. Malloy in 2014.

“You can never stop money in politics. We’re not trying,” said House Majority Leader Matt Ritter, D-Hartford. “We just want to know who you are.”

Paul Seamus Ryan, a national campaign-finance expert at Common Cause, has called the legislation a “cutting-edge” approach, but Republicans questioned if elements would survive judicial scrutiny, especially the $70,000 limit on contributions.

In Citizens United, the Supreme Court equated money with free speech, saying expenditures to influence campaigns cannot be limited, so long as they are made independently and not directly to a candidate. Direct contributions can be limited as corrupting.

In an interview in March when the bill was reported out of committee, Ryan said the court could view the $70,000 limit as a means to bar individuals from evading disclosure, not from limiting spending. His rationale is that individuals or corporations still could make unlimited independent expenditures in Connecticut under the proposed law — so long as they made them in their own name.

But the Democratic and Republican governors associations, who disclose the sources of their funds in public filings to the Internal Revenue Service, would seem to be caught by the $70,000 aggregate limit as some of their corporate donors give them hundreds of thousands of dollars in a calendar year.

The two groups were major sources of the $18.2 million in outside money spent on the 2014 race for governor. If the bill becomes law, the DGA and RGA could spend money in Connecticut, but it could complicate their fundraising.

The groups probably would have to raise money separately for Connecticut, limiting contributions to $70,000.