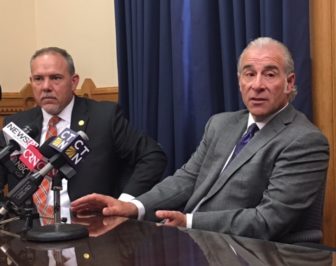 With passage far from certain, the House of Representatives postponed a debate promised for Wednesday night on a bill authorizing the state Department of Transportation to install a system of electronic tolls on major highways in Connecticut.

House Speaker Joe Aresimowicz, D-Berlin, said Democrats were considering changes that would give the legislature more control over the final process, a change that might pick up votes in the closely divided House.

Planning and installation of overhead toll gantries, which would record either the signal of an EZ Pass transponder or photograph a license plate, could take two years — meaning no revenue that could help balance next year’s budget.

But Aresimowciz said the passage of a law authorizing tolls would establish a reliable revenue stream in future years, allowing the state to reduce payments now into the Special Transportation Fund — essentially a temporary loan from that fund’s shrinking reserves.

“It would allow us, maybe, to reduce our payments to the STF now, knowing that the money is coming in the back years,” he said.

“It is once again another way for the majority party to have a revenue grab, because they can’t control the budget, they can’t downsize state government,” she said.

With stagnant fuel tax receipts — the state collects a gross receipts tax that is depressed by low gasoline prices and a flat per-gallon tax affected by improved vehicle fuel efficiency —the $1.46 billion fund is on pace to finish the fiscal year with a $37 million deficit.

The deficit would reduce the reserve from $143 million to $106 million.

The legislature’s Office of Fiscal Analysis projects the transportation fund will be insolvent in a few years, forcing the state to add to its backlog of deferred maintenance if new revenue is not found.

Rep. Tony Guerrera, D-Rocky Hill, the co-chair of the Transportation Committee, said the legislature needs to act now if it is to safely maintain its transportation infrastructure.

“We can’t keep kicking the can down the road here, because there’s no more road to kick that can,” he said. “We have to move forward on this.”

Gov. Dannel P. Malloy said he is opposed to tolls until the legislature passes a constitutional “lockbox” ensuring the revenue would go to transportation.