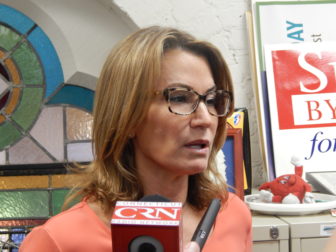 Bipartisan negotiations to solve the next state budget crisis may be running on borrowed time.

Republican legislators will bring few votes — if any — for the next state budget, as long as it relies on a concessions plan that extends a costly employee benefits program five more years, House Minority Leader Themis Klarides, R-Derby, said Thursday.

Klarides also told Capitol reporters she expects House and Senate Republicans to continue to offer cost-cutting proposals in bipartisan budget negotiations. But she declined to speculate on how much longer the GOP will be welcome at the bargaining table.

“I do not believe that the concessions plan that the governor negotiated with the unions is the only option we have,” she said. “I believe the statutory option is an alternative.”

Both Klarides and Senate Republican leader Len Fasano have said the concessions plan’s estimated value — $1.5 billion over two years — isn’t worth what the state must trade for it.

To get those savings under the deal, Connecticut must extend its worker benefits contract — which otherwise would expire in 2022 — until 2027.

So does the House minority leader expect few, if any, Republican votes for a budget built around this concessions plan and its five-year extension of the benefits contract?

Fasano’s office released an analysis Wednesday estimating only one-eighth of the concessions savings Malloy recommended several weeks ago  — less than $190 million — actually require unionized employees’ cooperation to achieve. Most of these involve pension and health care changes that would take effect immediately.

The bulk of the savings are tied to wages. And most union wage contracts expired in July 2016, though employees continue to work under the outgoing deal until a new contract is resolved.

Because of that, though, the GOP says state government has the legal flexibility now to dramatically alter rules unilaterally regarding wages.

Fasano offered a series of recommendations including:

Klarides said her caucus supports many of these ideas.

Fasano said Thursday he could support a budget that includes the five-year extension — if the state also legislated “additional significant structural changes” that reduce labor costs.

But labor leaders have said that is all but politically impossible. Any changes imposed unilaterally by the state, they said, would nullify any support among union members to ratify concessions.

Democratic legislative leaders questioned Wednesday whether Republicans are serious about a bipartisan solution to closing the $5.1 billion deficit projected for the next two-year budget.

“What (Klarides) is really saying is we should gut collective bargaining before giving state employees a chance to vote,” Malloy spokeswoman Kelly Donnelly said. “And really, what she’s saying is that this has never truly been about substance, but political posturing.”

Klarides said she told Malloy and legislative leaders her caucus would remain at the negotiating table and continue to offer proposals to cut state spending and reduce the projected deficit.

Fasano said Thursday that, “Senate Republicans will of course continue negotiations with all our ideas on the table.”

But will Republicans remain welcome in the talks without yielding on the concessions issue?

“We are all there in good faith, and we are hoping to see what we can agree to,” Klarides said. “So we are going to continue down the road until we can’t go down that road any further.”