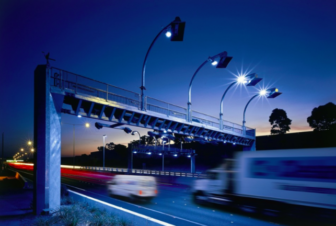 Modern tolls use overhead gantries like this one in Australia.

By taking up the issue of highway tolls late in the session and linking it to the state’s desperate need for revenue, the House Democratic majority has muddied a complex public-policy debate over how Connecticut might maintain crumbling infrastructure as its Special Transportation Fund staggers towards insolvency.

The House adjourned for a second consecutive day Thursday without an expected vote on a bill authorizing the Department of Transportation to implement a system of electronic tolls, a concession to the difficulty of tackling major controversial issues without bipartisan support in a closely divided General Assembly.

Transportation Commissioner James P. Redeker and his chief of policy and planning, Thomas J. Maziarz, spent an hour briefing House Republicans on changing federal policy that allows the state to establish tolls on interstate highways as part of a pilot program to provide much-needed funding for infrastructure and to test how congestion pricing can change driving habits.

Their explanation of how tolls could be implemented did not overcome the GOP’s objections to a plan by Democrats to effectively borrow against the new revenue stream to help close a budget gap — even if the first toll might not be collected for another three or four years.

“Once again, we’re not going to put our finger on that murder weapon,” House Minority Leader Themis Klarides, R-Derby, colorfully told reporters. “That’s what this is about guys. This is about more revenue grabs when we don’t even have any specificity on any of this stuff, right?”

Facing a constitutional adjournment deadline of midnight Wednesday, legislators are considering several major issues with hundreds of millions of dollars at stake, including whether to rewrite the rules for energy procurement to enhance the profitability of the Millstone nuclear power station or to license the first casino off tribal lands.

Legislative leaders already have given up on crafting a budget by the regular-session adjournment deadline of midnight Wednesday for the fiscal year that begins July 1. The toll debate is a preview of how difficult it will be to pass a budget without GOP votes.

Klarides said only one of her members, “at most,” appeared ready to vote for tolls. House Democrats, who hold a 79-72 majority, cannot find the 76 votes necessary for passage among their members. Should they somehow manage the find the votes, the bill still would have to clear the evenly divided Senate.

House Speaker Joe Aresimowicz, D-Berlin, who had hoped to open a debate on tolls Thursday afternoon, instead adjourned for the day shortly before 4 p.m., stunning legislators prepared to work late into the night as they rush to clear the calendar before adjournment.

“This is all a result of the numbers being so close. When you have governed for 38 of 40 years with large majorities, you can make decisions based on what you think is right,” Klarides said. “Your members can either go for it or they won’t. The people that don’t want to vote for it, they can give them a pass and they can vote no, because you have plenty of wiggle room.”

House Republicans, who held just 37 seats as recently as 2010, have nearly doubled their numbers over four two-year election cycles. With a 79-72 majority, Democrats need GOP votes to pass anything if more than three Democrats object to a piece of legislation.

Aresimowicz has not said how many Republican votes he needs to pass the tolls bill.

Rep. Whit Betts, R-Bristol, said the GOP lawmakers appreciated the briefing by Redeker and Maziarz, but they still had significant questions.

“Clearly, it’s not just us,” he said. “For days they have been unable to get enough votes in the Democratic caucus.”

In an interview, Maziarz said Connecticut can place tolls on interstate highways as one of a dozen states accepted by the Federal Highway Administration into the Value Pricing Pilot Program. It’s a new name for an old project to test the efficacy of congestion pricing to encourage motorists to stay off heavily traveled commuter routes at peak times.

Congestion pricing can be as simple as one rate for rush hour and another for off-peak travel times, he said. The only highways eligible for tolls are ones with congestion problems, which Maziarz said probably would include the entirety of I-95 and I-84 through Connecticut, and I-91.

One possibility on I-91 would be charging tolls only for entrance to what is now a high-occupancy vehicle lane north of Hartford.

Route 15, including the Merritt and Wilbur Cross parkways, would become a toll road, in part because it is an easy alternate route to I-95 in heavily traveled Fairfield County. Other state highways such as Routes 2, 7 and 8 would require study.

Modern tolls do not impede traffic with toll plazas. Overhead gantries charge passing cars via transponders, such as EZ Pass, or photograph license plates and bill by mail.

If the tolls bill passed, Rep. Tony Guerrera, D-Rocky Hill, the co-chair of the Transportation Committee, said the DOT probably would need a year and a half of study, then return to the General Assembly with a detailed implementation plan.

Federal rules require that toll revenue from interstate highways must be used for maintenance or improvements on those highways, a check on states diverting those funds for other uses.

Gov. Dannel P. Malloy said that safeguard is insufficient. He would not consider tolls without a constitutional amendment barring the use of transportation funds for anything but transportation.