The Connecticut legislature’s long debate about the implications of expanding casino gambling has come down to a stark question of transactional politics: What do a relative handful of urban Democratic legislators want in return for allowing the Mashantucket Pequots and Mohegans to jointly develop the state’s third casino, its first off tribal lands?

In the final days of a legislative session that ends at midnight Wednesday, some members of the Black and Puerto Rican Caucus have emerged as swing votes on what had once been three clear options: Allow the tribes a casino to compete with the MGM Resorts casino under construction in Springfield, accept MGM’s inducements to deny the tribes and instead open competition for a gaming resort in Fairfield County, or reject any expansion.

By a 2-1 margin on May 24, the Senate voted for a bill authorizing the tribes to open a satellite casino off I-91 in East Windsor, a community of about 12,000 people between Hartford and Springfield. It is a bid to slow the loss of gaming jobs and revenue as the two tribal casinos, Foxwoods Resorts and Mohegan Sun, face new competition in New York, Rhode Island and Massachusetts.

House Speaker Joe Aresimowicz, D-Berlin, and House Majority Leader Matt Ritter, D-Hartford, say they do not see votes in the House to pass the Senate casino bill unless the Senate first passes a companion bill — sweeteners sought by some urban Democrats, such a “boutique casino” in Hartford and slots machines at off-track betting facilities in Bridgeport, New Haven and Waterbury.

“This is a complicated subject. Gaming is lucrative, so people see opportunities to be part of it, and the Senate was able, maybe, to contain it a little bit. It’s been harder for us down here” in the House, Ritter said.

The sweetener bill represents its own problems.

There is no guarantee it could pass the Senate, where some supporters of the East Windsor casino made clear they were not interested in a further expansion of gambling. Legislators and lobbyists on the both sides of the issue say the sweetener could drive away as many legislators in the House as it attracts.

Rep. Chris Davis, R-Ellington, whose district includes East Windsor, said he and many other legislators see a satellite casino in the I-91 corridor as a limited and well-considered expansion of gaming that competes for a share of gamblers who otherwise would go to Springfield. He is unlikely to support gaming in Hartford, Bridgeport, New Haven and Waterbury.

“I think the only one that makes sense to me, public-policy wise, is in East Windsor or a facility in that area. It would ultimately, potentially, save revenue from going up to Springfield and protect those jobs,” Davis said. “The idea of them spreading it out to four of five more places, I think is a true public policy question for most people. It opens up gaming across the state.”

A small boutique casino in Hartford, where Ritter and Mayor Luke Bronin oppose placing slots at OTB parlors, would only have table games, envisioned less of a revenue generator than an entertainment attraction to bolster convention business. It is a model that seems untested.

Ritter said he was not demanding the Hartford casino provision, and if it is included in the sweetener bill, he would insist it would be an option subject to local approval.

The demand for slots in Bridgeport, New Haven and Waterbury is a puzzle.

As currently contemplated the slots would produce no gaming revenue for the host cities or the OTB parlors. The tribes, who have exclusive rights to slots, have little interest in competing with their own casinos. Legislators say the OTB industry is opposed for an obvious reason: The tribes will own the slots, not OTB.

For legal reasons, no one is seriously suggesting that the tribes share the slots revenue with the OTB owners. Aresimowicz and others say they fear the Bureau of Indian Affairs could invalidate the tribes’s agreements with the state: In return for exclusive rights to all casino gaming, the tribes annually pay the state 25 percent of its gross slots revenues.

Aresimowicz said some legislators seem to think slots would draw new customers, but sources associated with the tribes, MGM and the parimutuel industry are skeptical.

The tribes’ exclusivity deal has produced $7 billion for the state since 1993 and is projected to be worth about $260 million this year, though it has been shrinking since hitting a high of $430 million in 2007 and is expected to continue to fall once MGM Springfield opens. Slowing the deterioration of the revenue-sharing — and trying to offset the loss of thousands of jobs at Foxwoods and Mohegan Sun, once MGM opens, with new ones in East Windsor — is the heart of the tribes’ arguments for a new casino. 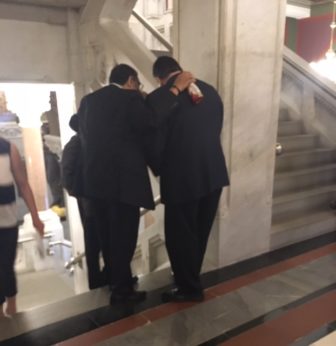 Rep. Bruce Morris huddles Saturday with two members of the Black and Puerto Rican Caucus. He said the subject was other than gambling.

Rep. Bruce Morris, D-Norwalk, a member of the Black and Puerto Rican Caucus, is an unlikely man to find at the center of a casino fight: One of his jobs outside the legislature is as a church associate pastor. But he has sided with MGM Resorts and is backing a request-for-proposal process to test what a license for a commercial casino in his end of Connecticut, close to the New York market, might be worth.

“I’m someone who normally doesn’t even endorse gaming,” Morris said. “However, it is inevitable we are going to expand gaming. It’s important we fill our budget gap today and in the future. That being the case, we have to make sure we get the best deal we can for the state of Connecticut. Open competition is the way that gets us there.”

During the House session Saturday, Morris and many other caucus members huddled in a first-floor hideaway, talking about the casino issue. After a roll call vote was held open for an extended period so the missing caucus members could return, Rep. John Piscopo, R-Thomaston, stood to suggest that the House suspend debating bills.

Rep. Joe Verrengia, D-West Hartford, a co-chair of the Public Safety and Security Committee that has oversight over gambling legislation, is another opponent of the East Windsor casino and a proponent of open competition. His position is firm despite being called into a meeting with Aresimowicz, where he says he told the speaker no sweetener would change his mind.

“I got the squeeze yesterday,” Verrengia said.

Clinton, the MGM executive, has told legislators that a casino license in lower Fairfield County could be worth $100 million to the state. A bigger question is whether a casino resort there could generate more annual revenue for the state than the two tribal casinos, which no longer would have to share their slots revenue if the state ends their exclusivity deal.

Gov. Dannel P. Malloy said he would not sign any bill that ends the tribes’ exclusivity.

Clinton, who is based in Las Vegas but has been a frequent presence in Hartford for months, is urging legislators to view the sweetener bill warily. The Bureau of Indian Affairs has informally reviewed the East Windsor deal, but not a further expansion of gaming off tribal lands.

Even if the sweetener passed, Clinton said, the BIA might force the state to abandon its provisions for fear of jeopardizing the revenue sharing; or Malloy might veto it.

“If you have these side deals in a second bill,” Clinton said, “you are foolish.”

House Minority Leader Themis Klarides, R-Derby, said the East Windsor casino bill passed by the Senate should rise or fall on its merits.

“The fact the speaker is contemplating putting in all kinds of things, slots in off-track betting, it’s  ridiculous,” she said. “He should call that bill as it came down from the Senate. We have to maintain those jobs in eastern Connecticut.”

Correction: As originally posted, Bruce Morris was described as the leader of the Black and Puerto Rican Caucus. He is the past leader.