Looking at police use of force from across a racial divide 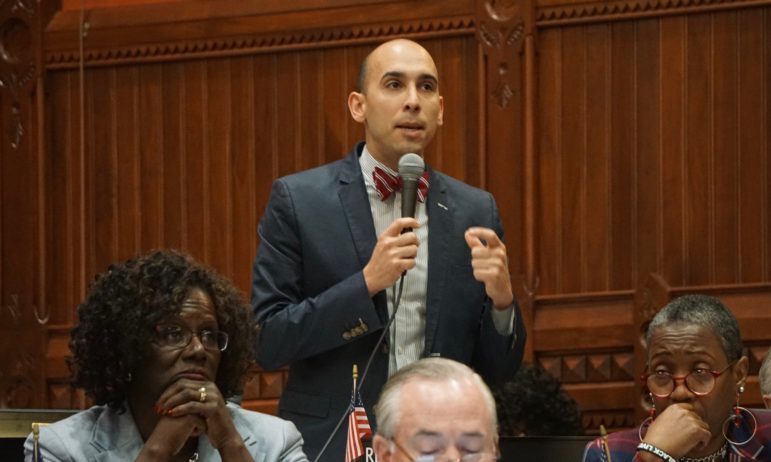 Rep. Chris Soto urges support of a bill that Reps. P.B. Miller, left, and Robyn Porter, knew would not get a vote.

A debate Monday over the police use of force laid bare partisan, racial and geographic divisions in the Connecticut House, where black and Puerto Rican Democrats united behind a bill whose very title, An Act Concerning Police Misconduct, was branded an insult to law enforcement by the House Republican leader.

As originally drafted, the bill would have required the state Division of Criminal Justice to make a preliminary decision within five days if a use of force by police was justified. If deemed inappropriate by a preponderance of the evidence, the officer would be immediately suspended without pay pending a full investigation.

The Black and Puerto Rican caucus convinced House Speaker Joe Aresimowicz, D-Berlin, to open a debate on a much-narrowed bill that focused on fatal police shootings at motor vehicles, an issue since Bridgeport police shot and killed 15-year-old Jayson Negron in a stolen car last month. Police said he threatened the officer with the car.

Negron was one of nearly 200 people killed since Jan. 1, 2015, according to a database compiled by the Washington Post, in what for decades has been one of the most controversial and oft-debated uses of deadly force: a police officer firing into a motor vehicle, a practice already tightly restricted by many of the nation’s police departments.

A succession of black and Puerto Rican Democrats rose in support of the bill, including Rep. Chris Rosario of Bridgeport, a civilian employee of the Police Department who says he is related to Negron by marriage. Then the debate was suspended without a vote and before Aresimowicz allowed House Minority Leader Themis Klarides, R-Derby, or any other opponent to speak.

The Democrats then solemnly filed out of the House chamber to briefly address reporters before going into a caucus. They stood at the west end of the wide, ornate House foyer behind a lead sponsor, Rep. Robyn Porter of New Haven, while Republicans massed at the east end, facing them. The optics were stark.

“Nothing about this has been normal, right?” Porter said. “I think it’s because of what the bill is about, you know? We’re talking An Act Concerning Police Misconduct. And that doesn’t sit well with a lot of people. They have an issue with the title of the bill.”

Porter declined to say how many more votes she needed to pass the bill in the closely divided House, where the defection of just four Democrats can turn a 79-72 Democratic majority into a one-vote advantage for the GOP. Klarides said the Black and Puerto Rican caucus clearly had lost more than four Democrats.

With the annual session facing a constitutional adjournment deadline of midnight Wednesday, debating a bill that cannot win passage once would have been unthinkable. But Democratic leaders have allowed symbolic debates three times this session, a recognition that their margins are too small to pass many controversial bills.

Aresimowicz is expected to allow a fourth symbolic debate Tuesday on legislation that would legalize the sale and possession of marijuana.

“This is how they lead the state of Connecticut? It’s an embarrassment. I mean, they don’t have the votes? It’s not our problem. But all we heard was the proponents,” Klarides said. “We had an entire caucus that had things to say.” 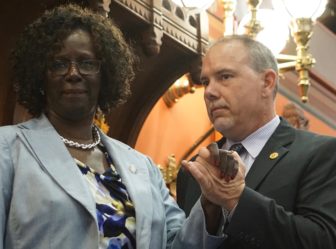 Porter opened her speech in support of the bill, explaining what it no longer included, a recognition that the GOP was happy to side with law enforcement in condemning what they said was a loss of due process rights for officers and a violation of collectively bargained disciplinary procedures.

Rep. Joseph Verrengia, D-West Hartford, a retired police officer, said he worked with Porter to strip out the language most objectionable to police. Verrengia said he could have supported the final version, but another retired officer, Rep. Jeffrey Berger, D-Waterbury, remained opposed, saying the bill still was too restrictive and the title alone would earn a no vote.

“It went from a horrible bill to a bad bill,” Klarides said.

Porter said the revised bill would have codified in state law the existing policy of the Connecticut State Police and many major police departments nationwide. Most departments instruct officers not to fire on motor vehicles unless a driver or occupant is threatening them with deadly force.

A police officer who felt a driver was endangering the officer or another person could use deadly force directed at the motorist under the proposed bill, but not use gunfire to disable a motor vehicle, Porter said. Supporters said the bill was meant to be instructive.

Klarides said that still was too restrictive.

“The problem here is we have seen so much violence against police officers who are out there putting their lives on the line,” Klarides said. “We are taking tools out of the toolbox.”

Many police departments, going back more than three decades, say firing on a motor vehicle seldom is good police technique. The Los Angeles Police, for example, say it is safer for police and public for an officer on foot to immediately flee from an approaching vehicle, not stop to take aim and fire.

“Firearms shall not be discharged at a moving vehicle unless a person in the vehicle is immediately threatening the officer or another person with deadly force by means other than the vehicle,” is the LAPD policy.

Bridgeport police say their officer shot Negron after he backed a car toward police.

Earlier in May, police in the Dallas suburb of Balch Springs quickly fired an officer after body-camera video showed he violated policy in shooting a 15-year-old boy who was a passenger in a car that backed out of a parking spot to flee a party.

“Because of the low probability of penetrating a vehicle with a handgun, officers threatened by an oncoming vehicle should attempt to move out of its path, if possible, instead of discharging a firearm at it or any of its occupants,” stated the Balch Springs policy, according to the Washington Post. “However, if an officer reasonably believes that a person is immediately threatening the officer or another person with deadly force by means of a vehicle, an officer may use deadly force against the driver of the vehicle.”

Rep. Chris Soto, D-New London, who performed law-enforcement duties with the U.S. Coast Guard, said the revised bill established a clear standard for police and the use of force, a protection for police and the public. He said the bill was not anti-police.