Rep. Doug Dubitsky, R-Chaplin, stands atop a tractor parked outside the State Capitol Tuesday. Rep. Bill Buckbee, R-New Milford, holds an inflatable cow next to him.

Farmers, agricultural leaders and lawmakers gathered outside the State Capitol despite some light rain Tuesday afternoon to rally against one budget proposal that largely has flown under the radar – the elimination of a stand-alone Department of Agriculture in the state.

About two dozen farmers showed up in the hope that their rally would quash a proposed merger of the agriculture department with the Department of Energy and Environmental Protection. The legislature’s Democrats floated the idea in their budget plan on May 16. 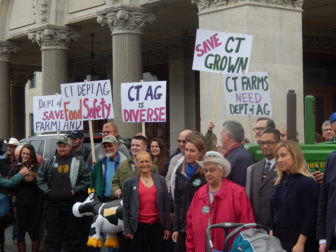 Rep. Pat Boyd, D-Pomfret, said he remains concerned some legislators see the possible merger as an opportunity to achieve cost savings. Boyd and other members of the General Assembly’s Rural Caucus attended the event in support of the farmers and the Department of Agriculture.

For some groups organizing rallies at the Capitol, rain typically portends poor attendance. But when Henry Talmage, executive director of the Connecticut Farm Bureau, saw it in the forecast, he couldn’t have been happier.

“When we heard it was going to rain today, we thought that was great, because we’ll have more farmers here than if it was a beautiful, sunny day,” Talmage said.

While the rally’s subject was no doubt a serious one, the farmers were all smiles as some lawmakers climbed on top of two tractors parked outside the Capitol. Gov. Dannel P. Malloy, who arrived later in the event, declined to climb one himself.

“I know what happened to Dukakis,” Malloy said, in reference to the infamous photo of former Massachusetts Gov. Michael Dukakis inside a tank during the 1988 presidential campaign.

Malloy said he is opposed to merging any departments, and continues to support an independent Department of Agriculture.

“Nobody has combined more departments in the past than I have,” Malloy said. “I got that done early, and I’m done doing it.” 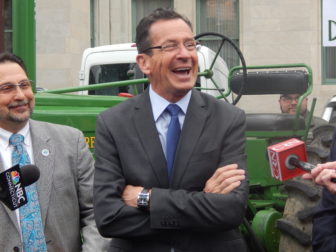 That’s why, Talmage said, the industry deserves its own “strong, stand-alone” department to “nurture the next wave of agriculture” in the state.

“The savings that we think would be realized by merging the Department of Agriculture into other agencies would be minimal and the risk is huge,” Talmage said.

Rep. Doug Dubitsky, R-Chaplin, who is a lawyer and farmer, said merging the Department of Agriculture would be “a disaster for the farming community.”

“We need a strong partner to agriculture, not merged into some other agency,” Dubitsky said.

Matt Peckham, a sixth-generation dairy farmer from Woodstock, said it seemed “incredible” to him that lawmakers would even consider merging the department as agriculture continues to grow in Connecticut.

“What the Department of Agriculture has done for my farm – between the grants that have allowed me to hire more people on, expertise that has allowed me to transition the farm into the next generation – it’s so important,” Peckham said. “And without them, we’d be lost.”