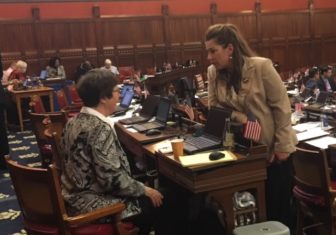 A standoff over a bill sought by Dominion Energy to boost the profitability of its Millstone nuclear power station temporarily stopped business in the closely divided House of Representatives on Wednesday, the final day of the 2017 legislative session.

The deadlock was broken with an agreement to allow Republicans only a brief, symbolic debate about why they believe Dominion deserved passage of legislation to preserve Millstone’s profitability, its high-paying jobs and its status as the state’s primary source of carbon-free electricity.

But there was no vote on the compromise legislation that passed the Senate on a 23-9 vote at 2:24 a.m., meaning it would die on the House calendar when the clock struck midnight, the constitutional adjournment deadline. The bill would have allowed the state to change the rules for how Dominion sells power from Millstone in the state’s deregulated electric market.

“We were disappointed that the House chose inaction,” said Chet Wade, vice president of corporate communications for Dominion. “Continued inaction harms customers, the state’s ability to meet its climate goals, and the state’s economy. We will continue assessing our investments in Connecticut while advocating for needed action.”

It was unclear whether the issue might be addressed in special session. Legislators, who conceded more than a week ago they were unable to resolve a budget impasse before adjournment, are certain to be working overtime this summer.

“We appreciate the Senate’s strong, bipartisan vote to help customers and to reject calls to double down on the failed system that has produced the highest electricity rates in the continental United States.  We were disappointed that the House chose inaction.  Continued inaction harms customers, the state’s ability to meet its climate goals, and the state’s economy.  We will continue assessing our investments in Connecticut while advocating for needed action.”

Without a race to complete the budget by the end of the session, the Millstone bill was one of the few sources of drama in the House, where a lawmaker married to a Millstone employee worked to convince Democrats the nuclear station was vital to the economy and environment.

The lobbying by Rep. Melissa H. Ziobron, R-East Hampton, prompted a sarcastic reaction from Tom Swan, executive director of the Connecticut Citizen Action Group, which was working against passage with AARP, environmentalists and Dominion competitors.

“How much of a bonus will Rep. Ziobron’s husband get if she lands this one?” Swan asked facetiously.

The Connecticut ethics code does not bar legislators from advocating for or voting on legislation sought by their employer or their spouse’s employer, so long as they have no direct financial stake. The code gives no advice on appearances of a conflict.

“I’ve been very honest and upfront about my husband’s employer from the beginning,” Ziobron said. “I’ve never hidden it.”

Ziobron asked the Office of State Ethics for advice soon after taking office in January 2013 as to whether she could talk to colleagues about a tax directed at Millstone and was told there was no bar to debating with colleagues or voting on the measure.

Swan noted that four senators who work in the power industry — Democrat John Fonfara of Hartford and Republicans John A. Kissel of Enfield, George Logan of Ansonia and Kevin Witkos of Canton — recused themselves, though the code did not bar their votes, either.

Ziobron said that as a member of a citizen-legislature, where most lawmakers hold outside jobs, she was sharing her knowledge about Millstone, a plant whose profitability has fallen along with the price of natural gas, the fuel used by most of its competitors.

“People had questions,” Ziobron said. “The questions always are, ‘Is Millstone lying? Are they really going to close?’ Obviously, I have insight from somebody who has been the wife of an employee for 20 years.”

Dominion is seeking changes to how it operates in the state’s deregulated energy market, claiming it could both lower electric rates and stabilize profits if the state allowed it to bid against hydropower, another carbon-free source of electricity, or sell directly to customers.

It has suggested the plant could close if it became unprofitable. Some legislators have expressed skepticism, saying Dominion should share financial data to show Millstone’s fiscal state before procurement rules are changed.

House Minority Leader Themis Klarides, R-Derby, had previously said she would prefer to see Dominion open its books, but that did not stop her Wednesday from advocating for the bill.

“This bill, whether you like it or not, deserved a debate, deserved a quesion and answer, and deserved a vote,” she said.

It would have authorized the commissioner of the Department of Energy and Environmental Protection to conduct an appraisal of the nuclear station and report in January on whether he would  implement any one of several changes allowed by the legislation. The bill directed the commissioner to act in the best interest of the consumer and the reliability of the electric grid.

The legislature would have the option of passing a second bill next year to stop new procurement rules.