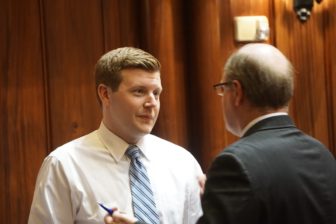 The Senate voted 28-8 Tuesday night to approve a bill that would make Connecticut one of the last states to impose standards on ride-sharing companies like Uber and Lyft.

The bill now heads to Gov. Dannel P. Malloy after facing what proved to be its last two close calls – a pair of Republican-backed amendments in the Senate.

With the legislature’s upper chamber evenly divided between Democratic and Republican members, both proposed amendments ended in a deadlock, probably keeping the bill from stalling for another year. Lt. Gov. Nancy Wyman cast a tie-breaking vote against the first and was absent for the second, meaning it failed on an 18-18 tie.

Had the Republican amendments passed, the bill would have had to go back to the House of Representatives with little more than 24 hours remaining in the legislative session – a death sentence for most legislation.

The measure’s final passage in the Senate marks the end of false starts and intense lobbying that played out over the course of three sessions.

Ride-sharing companies have been operating in the state without any regulation since Uber first arrived in 2014. The bill would classify Uber, Lyft and similar operators as “transportation network companies” – meaning they would be required to implement driver background checks and vehicle inspections as well as mandate that drivers have insurance coverage.

2015: Connecticut may leave Uber unregulated for another year

The final language was agreed to by representatives from Uber and Lyft, as well as taxi companies that, two years ago, sought to ban ride-sharing companies from the state altogether.

Rep. Sean Scanlon, D-Guilford, was the bill’s primary architect and has been its foremost navigator through the legislative process.

The bill passed the House 103-39 last month with bipartisan support. In a tweet early Wednesday morning, Malloy thanked Scanlon and Sen. Tim Larson, D-East Hartford, for their work on the bill.

The vote on the amendment was along party lines, with Wyman casting the tie-breaking vote to defeat it.

“The chairman is going to vote nay, only because of all the work that has been done beforehand,” Wyman said as she informed the Senate clerk of her decision.

The second amendment, introduced by Sen. Michael McLachlan, R-Danbury, would have called for restrictions regarding an Uber driver’s lienholder certification.

McLachlan spent nearly an hour pointing out what he called critical holes in the legislation – loose standards for background checks, vehicle inspections and required insurance. He said Uber dictated the bill’s terms.

“This is about as loose as it comes,” McLachlan said. “And I know why, because it’s what Uber put on the table. The more I get into the bill, the more aggravated I get – that this is an Uber bill. This is not a Connecticut General Assembly bill. This is not a taxi bill.”

Wyman was not in the chamber when McLachlan’s amendment went to a vote, meaning it failed on an 18-18 tie.

The final bill drew strong Republican support, however, with more than half of the caucus casting votes in favor.

In pair of statements, Uber and Lyft praised the legislature for passing the bill.

“Today’s bipartisan action by the Connecticut Senate is a monumental step forward to maintaining safe, affordable and reliable transportation for riders and flexible economic opportunities for drivers,” Uber General Manager Matthew Powers said. “Uber looks forward to continuing to work with Gov. Malloy in anticipation of the signing of this important bill, which would make Connecticut the 42nd state to enact comprehensive ride-sharing legislation.”

“This bill will allow ridesharing services like Lyft to expand in Connecticut, which will bring increased transportation options, earning potential, and economic activity to individuals and communities around the state,” said Lyft spokesman Scott Coriell. “We’d especially like to thank Sens. Larson, (Carlo) Leone, (Toni) Boucher and (Art) Linares for their hard work to get this bill through the Senate, and we look forward to the governor signing it into law.”