Vulnerable Access Health keeping an eye on other states 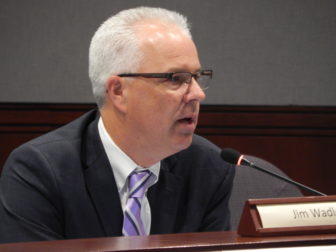 With Connecticut’s health insurance exchange teetering — with just two insurers left and neither yet committed for 2018 — the exchange’s board is beginning to watch innovations being considered in other states, including a single-payer system and Medicaid-for-all.

Currently, the exchange, Access Health CT, is hoping to keep both its insurers and begin its open enrollment period on Nov. 1. The exchange wants to close enrollment before Jan. 1 because insurers are insisting that customers be signed up for full-year plans.

But the board and CEO Jim Wadleigh are making contingency plans in case there is only one carrier, or even none.

A one-carrier exchange, although it would offer very limited  coverage choices, is at least doable for the coming year, Wadleigh said, but it would be tough.

“It takes time, there is no playlist around this. I tell my team, ‘Hey I don’t have all the answers,’” Wadleigh said. “It’s never been done, and it continues not to be done, so how do we move through that.”

A no-carrier system is an entirely different matter, he said. Access Health CT would be unable to offer any insurance in its individual market, which currently serves 100,000 people.

ConnectiCare and Anthem both have said they are considering leaving the exchange. Both are awaiting President Donald Trump’s decision on whether to continue cost-sharing reduction payments that reduce out-of-pocket costs – mainly deductibles and co-payments – for low and moderate-income individuals and families who qualify.

Trump has made no commitment to continue the payments, which would bring insurers about $7 billion this year. Many insurers say they won’t participate in ACA exchanges without the payments or will raise proposed rates even higher, by an average of almost 20 percent.

Adding to the uncertainty, Wadleigh said, is the possibility that Congress could replace the Affordable Care Act (ACA) with the GOP-sponsored American Health Care Act (AHCA) before next year. There would be no way to develop a system in time for 2018.

“If the AHCA is passed and made effective for January 2018, that ship is sailed. It would be pretty close to impossible to adjust by January of this year. It really takes us about nine months to adjust to that serious amount of change,” Wadleigh said.

Meanwhile, Access Health CT will continue to study other states in search of a possible alternative for Connecticut in 2019. Nevada and California were the ones discussed Thursday.

Nevada’s Democrat-controlled legislature has approved a Medicaid-for-all plan that is on the desk of Republican Gov. Brian Sandoval for a decision by Friday. California is considering a single-payer health system.

Both systems are designed to offer more affordable health insurance to residents.

California’s senate has approved a state-run, single-payer system for all residents that would replace private insurance and cost an estimated $400 billion annually.

The Medicaid-for-all system would allow anyone to buy coverage through the state’s Medicaid program, which would be offered on the state’s exchange along with plans from private insurers. Premiums would cover the full cost of coverage, but Medicaid usually pays health care providers less than private insurers. Those participating could apply their subsidies under either the ACA or the replacement health law to reduce their premiums. The plan is designed to pay for itself, with little to no additional cost to the state.

“We need to be looking at all different areas for what could be good for the state,” Lt. Gov. Nancy Wyman said.

With many states looking to change their systems in the next year, Wadleigh said, states could collaborate rather than develop 50 independent systems.