Gov. Dannel P. Malloy signed a consumer-protection bill into law Monday, but not before penning an unusual letter reviving his criticism of how the law’s influential sponsors, the top Democratic and Republican leaders of the Senate, rebuffed his insurance commissioner’s efforts to shape a bipartisan measure intended to cut the cost of prescription drugs.

“I am dismayed that the suggestions were ignored because, as we all know, an isolated process that occurs behind closed doors with cherry picked input rarely results in good policy,” Malloy said in a letter addressed all legislators. “I would be remiss if I did not caution that such a process will not always have a happy ending, and I urge the proponents to open their doors to a variety of perspectives.”

Senate President Pro Tem Martin M. Looney, D-New Haven, and Senate Republican leader Len Fasano of North Haven had rejected changes sought by Insurance Commissioner Katharine Wade, claiming they would weaken the bill. They suggested she was acting in deference to Cigna, the health insurer that employs her husband and formerly employed her. 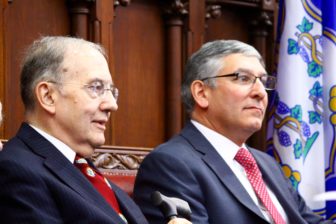 “I am further frustrated that an unwarranted and unfounded political attack was directed at my administration,” Malloy said in his signing statement, a clear reference to the Wade letter. “We are all on the side of protecting consumers and this political stunt had no place in the development of this legislation.”

Fasano said he and Looney engaged in no political stunt; instead, they broke off talks with Wade after concluding her view of the bill did not coincide with theirs.

“It wasn’t political; it was bipartisan in nature,” Fasano said. “Doors were open. Maybe we didn’t see eye to eye. That doesn’t make it political, but I thank him for signing it.”

Looney declined comment on the governor’s complaints, saying he preferred to focus on the content of what he called a strong, bipartisan consumer protection law.

Senate Bill 445 will outlaw “gag clauses” in pharmacy benefit-manager contracts that now bar pharmacists from telling consumers when they could save money by paying out of pocket for generic drugs that can cost less than the co-pay for a covered brand-name drug.

The bill also would require insurers to give better notice to consumers regarding the cost of using out-of-network labs.

“I think there is agreement this puts Connecticut at the forefront of consumer protection,” Looney said.

Malloy said those protections are good public policy, but he complained that the bill was written in a way that makes a violation an unfair trade practice — something enforced by the Department of Consumer Protection, not the Department of Insurance.

It was unlikely a veto would have withstood an override. The bill passed unanimously in the Senate and by a vote of 127 to 22 in the House.

The bill was one of more than three dozen signed Monday by Malloy. They included  a measure that creates a structure to regulate ride-sharing companies, such as Uber and Lyft, and a bill that expands the number of off-track betting licenses from 18 to 24. The latter bill was a companion to the law that authorized development of a casino in East Windsor.

Malloy now has signed 235 bills from the 2017 session and vetoed three.