Pence, Malloy compete to define what GOP is doing to health care 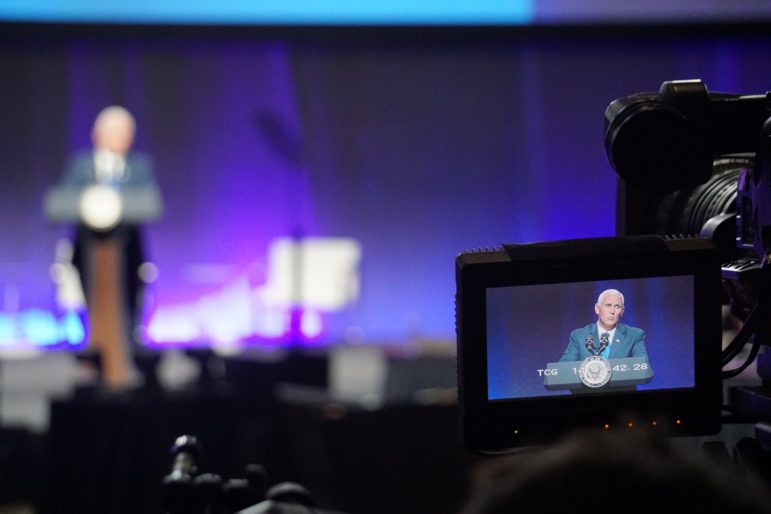 Providence, R.I. — Vice President Mike Pence and Democratic governors led by Dannel P. Malloy of Connecticut struggled Friday to establish competing political narratives over the latest Republican effort to revamp the Affordable Care Act and halt the related growth of a Medicaid program that greatly expanded during the administration of President Obama.

Pence told the National Governors Association that the Trump administration is intent on saving Medicaid, albeit by shrinking its reach or sharing more costs with the states. The Democratic governors said the Trump strategy for making Medicaid financially sustainable would either bankrupt states or deny coverage to vulnerable Americans.

“President Donald Trump is going to lead this Congress to rescue the American people from the collapsing policies of Obamacare, said Pence, who was the governor of Indiana when asked a year ago to be Trump’s running mate. His pledge was greeted by restrained applause by governors, staff and others at the NGA’s summer meeting.

The NGA meeting comes as Senate Majority Leader Mitch McConnell, R-Kentucky, is struggling to pull together a slim GOP majority for a key procedural vote on health care. With two of the 52 GOP senators publicly opposed, McConnell can prevail with Pence breaking a 50-50 tie, but only if no other Republicans defect. 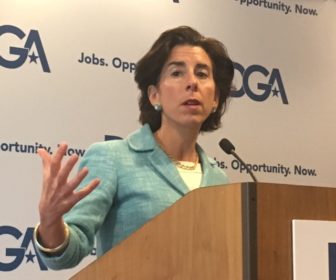 Just as Republicans made political capital of Obamacare, Democrats see the issue turning to their advantage as Trump, McConnell and House Speaker Paul Ryan, R-Wisconsin, pursue revisions that will mean less health coverage for Americans, including in red states that opted to expand coverage under Medicaid, a program jointly funded by state and federal governments.

As the governor of Connecticut, a state where one in every five residents gets his or her health care through Medicaid, Malloy sees the latest Republican efforts to revamp the Affordable Care Act as bad public policy — a massive shift of expenses from the federal government to states that already are financially strapped.

But in his other position as chairman of the Democratic Governors Association, Malloy sees the GOP determination to erase a legacy of President Obama as a political gift, an issue putting Republicans on the defensive as the nation begins a two-year election cycle in which 36 governors will be elected, including Malloy’s successor in Connecticut.

Gov. Gina Raimondo of Rhode Island, the Democrat hosting the meeting, said the focus away from the formal sessions was on the political and policy ramifications of the latest efforts to not only overhaul Obamacare, but redefine the state and federal partnership over Medicaid. The Senate bill would convert Medicaid from an open-ended entitlement to a system of fixed payments to the states.

“It’s on everyone’s mind. It’s in every private conversation,” Raimondo said. “There is a high degree of anxiety. Even Republican governors will say they are worried, particularly the ones that have taken the Medicaid expansion, they are worried. They see it as an unfair shift of financial burden from the federal government to the states.”

With a half-dozen other Democratic governors, Malloy pushed a message that the DGA hopes will reverse a tide that has left the U.S. with only 16 Democratic governors. Republican candidates for governor are loathe to take a position on health-care reform for fear that embracing Ryan , McConnell or Trump would be a safe course in GOP primaries, yet dangerous in a general election. 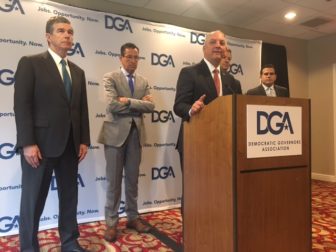 “As we look at the map, as we look at candidates, Republican candidates for governor in state after state, they are not taking a position on the House package or the third Senate package that has come out,” Malloy said. “They are hearing no evil, seeing no evil and refusing to say anything.”

Malloy, who is not seeking a third term in 2018, said that applies to every Republican running or exploring a run for governor in Connecticut. If passing Obamacare were a political boon to Republicans, the GOP’s fitful effort to repeal it has been awkward, to say the least, for their party’s efforts to hold onto state houses.

Connecticut’s Republican state chairman, J.R. Romano, said the GOP’s contenders for governor are focused on the state’s failure to adopt a budget two weeks into a fiscal year in which Connecticut faces a projected shortfall of more than $2 billion, or about 12 percent of its total spending.

Romano challenged the notion that saving Obamacare is a political winner for Democrats.

“You have the Democrats stamping their feet, pretending that Obamacare was some kind of success,” Romano said. “It wasn’t.” 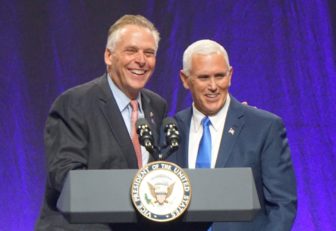 Pence was introduced by the NGA’s chairman, Democratic Gov. Terry McAuliffe of Virginia, who noted that Indiana under Pence was one of the states to expand Medicaid.

The vice president smiled, then launched a vigorous defense of the Republican efforts to revise the Affordable Care Act. He highlighted the small number of counties in the U.S. where no or little health-care is available under the insurance exchanges established by the law and said premiums were quickly becoming unaffordable.

“I know you know these facts,” Pence said. “As governor you are living these realities.”

Raimondo, who met privately with Pence, said that is not the experience in Rhode Island. The number of uninsured in Rhode Island dropped from 113,000 to fewer than 50,000 in the first year after the Affordable Care Act took effect, according to a survey conducted for HealthSourceRI, the state’s health exchange. Another 82,000 took advantage of expanded Medicaid coverage

“I would certainly assert strongly that the bill which came out of the Senate, it would be terrible for the people of Rhode Island,” Raimondo said. “There’s no reason for it. It’s working. The Affordable Care Act is working in Rhode Island. We have 96 percent of people covered; 98 percent of kids are covered. Our exchange is working well.”

At a DGA press conference, Malloy deferred at times to the governors of Republican-leaning states, such as John Bel Edwards of Louisiana, Steve Bullock of Montana and Roy Cooper of North Carolina.

“As the last state to expand Medicaid, I can tell you that in a year’s time we have 430,000 working adults who are covered,” Edwards said.

The uninsured rate in Louisiana fell from 24 percent to less than 12 percent, he said.

“It is literally saving lives. It is saving money,” he said. “It is making a real difference for working people in our state.”

Pence said Medicaid spending actually would increase in coming years by up to $500 billion, though ending its status as an open-ended entitlement would cost the states an estimated $700 billion. 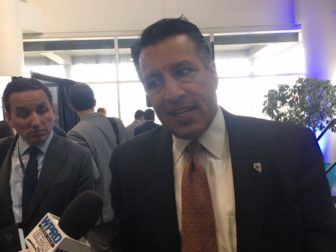 Gov. Brian Sandoval of Nevada, a popular Republican who cannot run again because of term limits, echoed the Democrats on the policy concerns about Medicaid, saying the changes would hit his state hard. About 210,000 Nevada residents are newly eligible for Medicaid since his state opted for expanded coverage, he said.

“I was the first Republican governor to opt in for the Medicaid expansion,” Sandoval said. “We’ve cut our uninsured rate in half. We’re the most improved state in the country with regard to insuring children. It’s been helpful to veterans. It’s been helpful to senior citizens. I mean, across the board, Nevadans are better off because of that, and that’s why I’ve been pretty firm in my positions.”

Sandoval, whose staff still was analyzing the latest bill, reserved final judgment, but he saw much that concerned him, as was the case with previous versions. His earlier opposition was thought to have influenced Sen. Dean Heller, R-Nevada. He planned to talk later Friday with Heller, whose opposition would stop the bill’s progress.

“I hope I can better inform him with regard to its impact on Nevada,” Sandoval said.

Malloy praised Sandoval, saying incumbent Republicans are more focused on the impact of the legislation than the politics.

“I know Gov. Sandoval,” Malloy said. “He has clearly put the interest of his citizens above that of politics in his state. I think as you look at the torment of the senator from Nevada on this issue, he knows what’s right. He knows what needs to be done. He’s expressed that in the past. We hope he expresses it in the future.”