Human services cuts take effect after a month without a budget 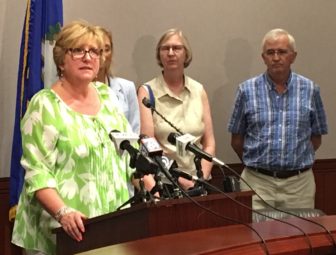 After a month without an adopted budget, the first round of cuts to human services agencies across state government took effect Tuesday.

The departments of Mental Health and Addiction Services (DMHAS), Developmental Disabilities, Correction, Social Services, and Rehabilitation Services  all were cut to varying degrees under the executive order Gov. Dannel P. Malloy signed to operate the state for the fiscal year starting July 1.

The second round of cuts is set for Sept. 1 if a budget still hasn’t passed.

Much of the lost funding goes to nonprofit organizations the state contracts with to provide services to the mentally ill, the disabled, the poor, and those leaving prison.

“Our tagline is real life, real hope,” said Heather Gates, president and CEO of Community Health Resources (CHR) at a press conference held by The Connecticut Nonprofit Alliance on Tuesday. “Right now we are only looking at budget cuts to reinforce the real-life element, with very little hope of relief.”

The cuts to Gates’ agency were part of a 2.5 percent overall reduction in contract funding at DMHAS. Gates said she froze all vacant positions in her community support programs, cut support of employment programs by 15 percent, froze  the position of a substance abuse therapist working with brain-injured adults, and cut a jail diversion program.

CHR Peer Support Coordinator Annette Diaz, who was once a client and now works for the agency, said she helps people get back on their feet after being homeless, incarcerated or addicted to drugs or alcohol.

“Community services helped me be where I am today,” Diaz said. “It’s devastating to hear the cuts that can impact so many people that won’t even get a chance at where I’m sitting today. It makes me almost want to cry.”

“The reality is we pay one way or we can pay another. We either do the right thing by getting a budget and protecting our nonprofits, or — let’s use elderly as an example — they end up in a nursing home. Ninety-five percent of nursing homes are paid by Medicaid. It’s more cost effective to keep them in their home under home care,” Abercrombie said.

The Alliance said cuts at the Department of Developmental Services included:

The Department of Correction will see a 4.5 percent reduction in first-quarter funding.

Jeff Grant, the executive director of Family ReEntry, which helps inmates leaving prison and their families, said his agency escaped specific cuts this month but said its non-residential behavioral health programs were cut last year and services to former inmates are diminishing across the state.

He said he has seen hundreds of former inmates, including himself, who were helped by mental health and addiction counselors as well as housing and employment placements provided by state-funded non-profits.

“When I came out, I went to court-ordered drug and alcohol counseling, which I did do in state here. Thank god it was available for me,” Grant said. “With the opioid epidemic that’s going on now and the cutbacks of a lot of these services, there are a lot of sick and suffering people out there. I had an opioid addiction. I’m clean and sober 15 years this week actually, but I don’t know what would have happened without the programs.”

Abercrombie and the Alliance called for outsourcing more state-run programs to nonprofits, which they say can run them more cheaply. Already more than 75 percent of services funded by the Department of Developmental Services are provided by nonprofits.

“Conversions of programs to nonprofits need to go forward, even in the context of the no layoff pledges and the SEBAC agreement,” said Peter DeBiasi, chair of the Alliance board.

Several state employee unions have clauses in their contracts that limit layoffs for privatizing services. Currently, the state’s largest healthcare workers’ union, SEIU 1199 New England, has a lawsuit pending in Hartford Superior Court challenging the Malloy administration’s plans to lay off more than 600 state workers by privatizing 40 group homes for the developmentally disabled.

The union argues that state-run services with stable employees can provide better care for disabled, poor or mentally ill clients.

DeBiasi urged passage of a budget as soon as possible, even if it were a stopgap temporary measure to get funding flowing.

But Abercrombie said she is willing to wait for a permanent budget in order to maintain leverage when negotiating for human services funding.

“If you lock yourself into a mini-budget, then you lose your negotiating power with the governor,” Abercrombie said. “We are trying to do the right thing. The right thing is not going after the easy target, which is the human services field, and that’s why we don’t have a budget, because we are holding firm on some of the programs that are really important to us.”