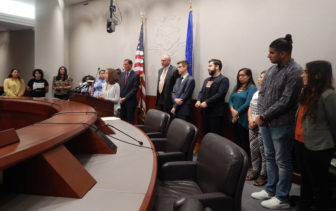 Yenimar Cortes, a DACA recipient from New Haven, shares her story as DACA advocates gather at the State Capitol Wednesday.

With a decision from the White House expected soon, immigrant youths and their advocates made one last push in Hartford Wednesday to convince President Donald J. Trump to maintain their protected status.

About 10,000 immigrant youths in Connecticut are shielded from deportation under an Obama-era executive order known as Deferred Action for Childhood Arrivals, or DACA. It gives undocumented children brought to this country by their parents protection from deportation and a work permit. The recipients are known as “Dreamers.”

Trump is weighing whether to continue the program. Ten state attorneys general have asked the Trump administration to rescind it, and are threatening to sue on Sept. 5 if he does not.

It remains unclear whether U.S. Attorney General Jeff Sessions will defend the executive order in court.

“This is a chance for the president to prove whether he believes in the American Dream,” U.S. Rep. Elizabeth Esty, D-5th District, said. “Does he believe in an inclusive country in which out of many, we become one?” 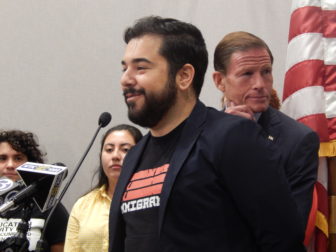 Lucas Codognolla, executive director of Connecticut Students for a Dream, speaks at the press conference. Blumenthal, right, stands behind him.

Several DACA recipients shared their stories at the event, and called on Trump to preserve the program.

“I was able to work, provide for myself, be able to pay for college, but also provide for my family,” said Lucas Codognolla, executive director of Connecticut Students for a Dream. “And the reality is that the DACA program … they’re the breadwinners for their family. Taking away someone’s opportunity to work not only has an impact on them individually, but on the status of their family.”

Later Wednesday afternoon, Gov. Dannel P. Malloy and Lt. Gov. Nancy Wyman both signed onto a statement with other leaders across the country, calling on Trump to preserve the program.

“To deny undocumented youth who have grown up in America with access to affordable higher education and work opportunities goes against the very core of who we are – it is penny wise and pound foolish,” Malloy said.