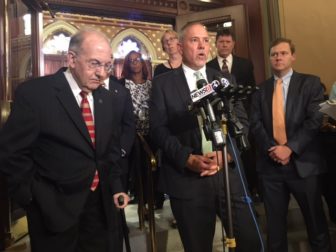 House Speaker Joe Aresimowicz talks to reporters before the deal unraveled. At left is the Senate leader, Martin M. Looney.

Asked if the House would go ahead with a scheduled vote on a package that had yet to be fully disclosed, the normally genial Aresimowicz gave a sharp one-word answer as he quickly passed through a gaggle of waiting reporters:  “Nope!”

A spokesman for Senate President Pro Tem Martin M. Looney, D-New Haven, said the Senate would return Friday afternoon to attempt to pass a budget that originally was to be debated first in the House.

Early Friday, House leaders notified their members to return at 5 p.m., a sign it would attempt passage if the budget cleared the Senate.

Republican leaders called on Democrats to scrap their plan and open negotiations for an alternative that could attract GOP support.

“This is the clearest example of why they need to do this,” Senate GOP leader Len Fasano of North Haven said after the budget debates were canceled.

Fasano and House Minority Leader Themis Klarides, R-Derby, noted as midnight approached that the Democratic majority had yet to produce a full budget document for review by lawmakers, the press or public. The earliest it would become available, she said, was 3 a.m.

Unclear was whether the unavailability of the document reflected changes made during the day in response to lawmakers’ demands.

Klarides said House Democratic rank and file were angry at the lack of details, and she accused the Democratic leaders of pushing for a budget compromise with elements opposed by members of both parties.

Larry Perosino, a spokesman for Aresimowicz, declined to say at 11:35 p.m. if the Democrats lacked the votes for passage. He said the postponement was forced by the expected unavailability of the full budget document for another five hours.

Gov. Dannel P. Malloy and Democratic legislative leaders had worked for days to bring the simmering budget debate to a boil, forcing a decision by legislators in a closely divided General Assembly.

Malloy made some timely compromises, while the Democratic legislative leaders tried to cast the vote as a choice between a sensible, if unpopular budget and the worse alternative of forcing the governor to slash aid to cities and towns by executive order. 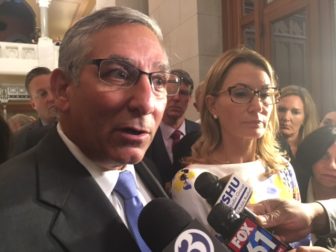 The GOP leaders, Sen. Len Fasano and Rep. Themis Klarides, after the vote was postponed.

Chances of passage seemed to markedly improve when hospitals dropped their opposition to a tax intended to leverage increased Medicaid reimbursements, the largest single revenue increase.

The Connecticut Hospital Association, which was sharply critical of the governor’s proposal to boost taxes on the industry Monday, negotiated legal “assurances” with the governor and top lawmakers that the levy would impose no fiscal burden on hospitals.

The tax increase would yield $344 million in extra annual payments from hospitals, leveraging hundreds of millions of federal Medicaid dollars. Malloy proposed from the start that the state redistribute all of those dollars — and more — back to the industry.

Overall, the compromise budget would have broken new ground, raising taxes or fees on seasonal homes, cell phones and fantasy sports gambling as part of a broad package of increases expected to raise $1.53 billion across this fiscal year and next combined.

Sources said one of the major problems was tied to efforts to help Hartford avoid insolvency. Bridgeport Mayor Joseph P. Ganim huddled with his city’s delegation, who sources said were unhappy with Bridgeport’s treatment in the budget.

Most of the $47 million included in each year of the deal to help financially distressed municipalities was targeted for Hartford, sources said. Mayor Luke Bronin had asked for at least $40 million in additional state aid each year.

Bridgeport officials were disappointed that state aid to Connecticut’s largest city basically would have been flat-funded in the new budget while Hartford got emergency assistance and $115 million in bonding for renovations to the aging XL Center arena.

Ganim said “certainly there is concern” about whether the budget contained sufficient aid for his city, but downplayed any idea that Bridgeport lawmakers were irked by the level of assistance for Hartford. He added, though, that, “We’re scraping for every dollar. We don’t want to end up in deficit, too.” 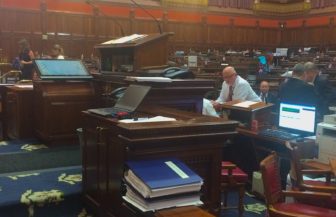 The podium is empty and the House chamber nearly so shortly after Democrats failed to muster the votes to convene a budget session.

As the day progressed, opposition solidified around various aspects of the compromise, and it became clear Aresimowicz was struggling to build a majority in a chamber where Democrats have a 79-72 advantage, meaning the defection of just four Democrats can block passage.

In the Senate, where each party holds 18 seats, the Democrats’ only advantage is the tie-breaking vote of Lt. Gov. Nancy Wyman. Looney said he believed all 18 Democrats would back the compromise, but others said three fiscal conservatives in his caucus had made no firm promises.

As a prelude to action by the full General Assembly, the legislature’s Finance, Revenue and Bonding Committee narrowly endorsed revenue estimates Thursday afternoon that reflect higher tax rates on hospitals, hotel stays, cigarettes and other tobacco products, curtailment of income and sales tax credits, and a requirement that municipalities cover a portion of the annual contribution to the teachers’ pension program.

Earlier proposals to reduce Connecticut’s estate tax — which is imposed on estates valued at more than $2 million — and to increase taxes on real estate conveyances and on e-cigarettes were scrapped.