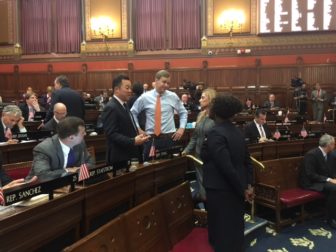 The administration of Gov. Dannel P. Malloy warned legislators Wednesday of a flaw in the bipartisan budget’s hospital tax provision that could open a $1 billion gap in the two-year spending plan, a message coolly received by lawmakers in a mood to celebrate an end to the state’s long budget impasse.

House Majority Leader Matt Ritter, D-Hartford, and House Minority Leader Themis Klarides, R-Derby, said the House would not postpone final passage of the budget already approved by the Senate, because they could correct any errors in supplemental legislation.

“If there’s an error, there’s time to fix it,” Ritter said. “What we need to do is get through today. The lawyers will meet tomorrow. If we are advised there is a drafting error, we have ample time to come back, in a matter of days. We can call ourselves back at any time. It’s not a big deal.”

“We just became aware of it. I don’t know if it’s accurate or not,” Klarides said of the administration’s warning. “But if it is, we’ll fix it.”

The late flap over the hospital tax, however, underlined the strained relationship between the Malloy administration and Democratic leaders since they shut the governor out of budget talks and agreed to a compromise with Republicans.

The hospital tax is a complex legal and fiscal maneuver designed to increase federal Medicaid reimbursements, then give back the taxes — and more — to the hospitals. The state would get a net revenue increase of $137 million in each year of the biennium.

The administration gave the legislature suggested language, which apparently was not used in the budget document approved by the Senate shortly before 2 a.m. Instead, the administration, said, it appears the hospitals are guaranteed a windfall paid by the state, regardless of whether the federal government signs off on the Medicaid change.

“This morning, the administration identified a significant problem in regard to the hospital tax,” said Kelly Donnelly, the governor’s spokeswoman. “The language as drafted would make federal reimbursement impossible. We notified legislative leaders about the error and strongly urged them to correct it before final passage.”

House Speaker Joe Aresimowicz, D-Berlin, said after the budget vote that the information from the administration came too late, which was disputed by Ben Barnes, who oversees the state budget as secretary of the Office of Policy and Management.

“The administration provided workable language to all four caucuses before the budget was drafted,” Barnes said. “That language was prepared by classified civil servants at DSS and DRS, lawyers with specific expertise in Medicaid law. We urge the General Assembly to fix this problem right away.”

The single-biggest tax hike in the budget is the hospital tax.

It would raise the annual tax on hospitals by $334 million, from $556 million to $900 million. Connecticut would return all of those funds to the hospital industry, and then some, to qualify for additional federal Medicaid reimbursement.