Democrats hoping that, thanks to Trump, not all politics are local 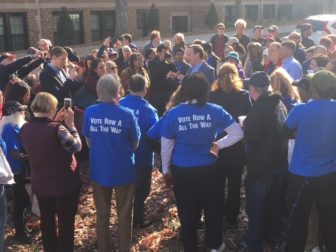 New Britain — This racially diverse, blue-collar city of 73,000 and its young Republican mayor, Erin Stewart, offer a test and a target for Democrats exploring whether anger at President Trump can be constructively harnessed, first in Tuesday’s municipal elections and then next year in the fight over control of state government in Connecticut.

Trump is not on any ballot. Neither is Gov. Dannel P. Malloy, a Democrat who is not seeking re-election next year after seven years of fiscal tumult, including the recent adoption of a budget four months overdue. But to varying degrees, both are playing roles across the state in the 32 contests for mayor, 93 for first selectman and scores of down-ballot races.

At a get-out-the-vote rally here over the weekend, U.S. Sen. Chris Murphy conceded to Democratic volunteers that the elections here were primarily about local governance. But then he urged them to use the president’s unpopularity to goad Democrats and unaffiliated voters to the polls.

“You’ve got to let people know if they stay home on Tuesday, they are endorsing what’s happening,” said Murphy, who represented New Britain in the U.S. House before his election to the Senate in 2012. “If you stay home on Tuesday, you are providing a silent endorsement of this president.”

Cheering him was Marianne Hebenstreit, a self-described late-in-life activist. After Trump defeated Hillary Clinton, she decided to the join the women’s march on Washington, then sought ways to engage politically in Connecticut, including volunteering for the mayoral campaign of Democrat Merrill Gay.

“I’ve never been an activist,” Hebenstreit said. “I never wanted to be an activist.”

But now she is.

Dotted throughout the crowd were women wearing shirts pronouncing them members of “Action Together Connecticut,” a political action network quickly organized after Trump took office. Gabriele Kennedy of Middletown said the group saw New Britain as “flippable” and came to help Gay’s campaign.

Mike Mandell, the executive director of the state Democratic Party, said Trump has been the party’s best recruiter, drawing first-time volunteers to phone banks that are central to the Democrats’ efforts to broaden the base by engaging and delivering voters who normally turn out only in presidential elections.

Those coordinated phone banks have made twice the calls placed in 2015 and 15 times those in 2013, the year before the party began its effort to engage the occasional voter, Mandell said.

“The president has nothing to do with local politics,” said Stewart, who has kept her distance from Trump, who was soundly beaten in New Britain. “I’ve had people come up and tell me, ‘I don’t like Trump and I know you’re a Republican, but I don’t think you’re associated with him. I know you’re not associated with him, because of the work you’ve done for the community.’ To try to nationalize a local race, I don’t think that message resonates.” 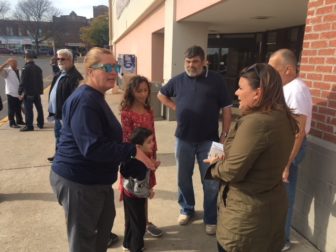 “I think they are making a mistake if they are taking a local election and trying to nationalize it,” said Danbury Mayor Mark Boughton, a Republican seeking re-election Tuesday and a potential gubernatorial candidate in 2018. “It’s silly and ridiculous. Local elections turn on local issues and local personalities.”

Democrats, of course, are trying to use local issues against Stewart, most notably the recent downgrade of the city’s general-obligation bond rating by Moody’s Investors Service, citing a reliance on non-recurring revenues in recent years. Over the weekend, Democrats were circulating a copy of a Bond Buyer story with the headline, “New Britain, Conn., mayor says city on right path despite downgrade.”

Stewart said her administration of New Britain, which was in financial crisis when she took office, still is a fiscal success story. S&P Global upgraded the city’s bond rating by four levels in two upgrades last year and affirmed its A-plus status earlier this year.

Democrats also are using Stewart’s potential as a statewide candidate against her. Nick Balletto, the Democratic state chairman, told the GOTV rally, “She’s running for her next job.”

But not all voters here see ambition or potential as negatives.

Candy Michaud was happy Saturday to find Stewart campaigning outside the Save A Lot, a no-frills grocery store. They had never met, but Michaud told her she “should take Malloy’s place.”

George Orman, another shopper and an old friend of the Stewart family, tilted his head toward Stewart and said, “Guess who’s going to be next? She’ll be better than Malloy.”

“If you could do that next big step, girl, you’d be in,” Michaud said.

Stewart laughed and said, “I’ll think about it.” 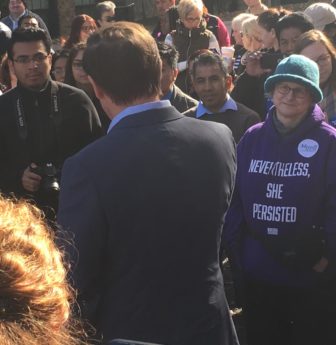 Marianne Hebenstreit, at right, was motivated to become a political activist by Trump.

The mayor did not dispute the notion that associations with Trump, as well as Malloy, are political liabilities.

A Washington Post-ABC News survey published Sunday shows that fewer than four in 10 Americans approve of Trump’s performance, an approval rating lower than any previous president at this point in his presidency over seven decades of polling.

“Normally,  there is not a lot of connection between the national mood and the local elections. People like to make that connection, but often it’s not the case,” Murphy said after the GOTV rally. “This could be the exception to the rule. This year, people could be so freaked out about what’s happened nationally that people come out — especially in a diverse city like this.”

Trump’s base of non-Latino whites are a minority of about 33,000 in New Britain, which has a population of about 29,000 Latinos and 8,000 African-Americans, according to census estimates released in 2015. The median household income is $40,000, and nearly a quarter of the city’s population is below the poverty line.

Gay said his Democratic slate, half of whom are women and half of whom are people of color, is the most diverse ever to run in New Britain. Stewart campaigned Saturday with incumbent aldermen Jerrell Hargraves and Kristian Rosado, two African-American candidates she recruited, one a Democrat and the other an unaffiliated voter.

“The Democrats want to create a permanent kind of resistance to keep their voters engaged in anger, not in unity but in anger,” Romano said. “They are stoking fires instead of having an actual debate over policies.”

The Post-ABC Poll gave some support for that view: It found that 61 percent of voters mainly see Democrats as criticizing Trump, not offering alternatives.

Romano said Malloy was a counterweight to Trump.

“There is one person who is more unpopular in this state, and that is Dan Malloy,” he said.

Malloy had an approval rating of 23 percent in a Morning Consult poll released last week. The only governor more unpopular was Republican Chris Christie of New Jersey, whose approval rating was 18 percent.

Until the recent passage of the budget, most communities were faced with deep cuts in state aid under the terms of an executive order issued by Malloy. In West Hartford, a mailer from the Republican slate for council accused the Democratic majority of being unwilling to fight Malloy: “Our team will fight for West Hartford, not Governor Malloy.”

A mailing from Shari Cantor, a Democrat who has the title of mayor as the top vote-getter on the town council, used the State Capitol as a generic foil, saying she “persisted in defeating Hartford’s cuts to West Hartford.” There was no suggestion of who in Hartford proposed those cuts.

Malloy was noticeably absent from Connecticut over the weekend, attending a cyber security conference out of state instead of leading GOTV events, a task left to Murphy, U.S. Reps. John B. Larson and Elizabeth Esty and other Democrats unburdened by negative approval ratings.