Connecticut is closing the Enfield Correctional Institution, a prison that opened in 1962 as the Osborn Prison Farm and nearly doubled in capacity a quarter-century later — in the early years of a stunning sixfold increase in state inmate population that peaked in 2008.

Closure of the 700-bed, medium security prison comes as the state prison population is continuing to contract, a consequence of a falling crime rate, demographic trends and sentencing and bail reforms implemented during the administration of Gov. Dannel P. Malloy.

Correction Commissioner Scott Semple told all three shifts at the prison Tuesday that the facility would close in January or February. Its 193 employees will be offered transfers to one of the five other prison complexes in Enfield and neighboring Somers and Suffield.

The closing is expected to save $6.5 million annually. Malloy called the savings a natural “byproduct,” of favorable crime trends in Connecticut, not the impetus for the closing.

“To have fewer reasons to incarcerate people, that’s a good thing,” said Malloy, who has supported a raft of reforms by Semple, including the opening of community reintegration centers to prepare inmates for release. “The purpose is to make people safer on a short-term and long-term basis.”

State employees are protected from layoffs under the terms of a concession agreement reached this year, but the department has more than enough vacancies to absorb the Enfield staff, said a department spokeswoman. The rate of correction retirements is far outpacing the need to shrink the workforce. In fact, the department is beginning a training class for new officers Friday.

“The Enfield facility was chosen as the facility to close for a variety of reasons including: the age of the buildings, the cost to maintain and make necessary upgrades to its infrastructure, the preference to maintain celled infrastructure and the close proximity to other facilities,” Semple said in a message to staff.

Enfield is the latest and one of the largest in a string of a half-dozen prison closures and downsizings since 2010 and the second to be announced this year.

In April, the state closed the 254-bed Radgowski annex at the Corrigan-Radgowski Correctional Center in Montville, saving about $3 million in annual operating costs. The biggest to close was the 1,000-bed Bergin Correctional facility in Mansfield in 2011.

Connecticut ended the 1960s with 3,112 people in prison, a population that more than doubled by the time of Enfield’s expansion with new dormitories. Prisons across the U.S. were in the early days of a fourfold increase in inmate populations, beginning what is now called the “era of mass incarceration.”

The state’s inmate count grew for another 20 years, reaching a high of 19,894 in 2008 — in all, a sixfold increase in less than 40 years, far outpacing both the growth of the crime rate and population. It’s now at 14,103  two years after the legislature repealed mandatory minimum sentences for minor drug crimes. 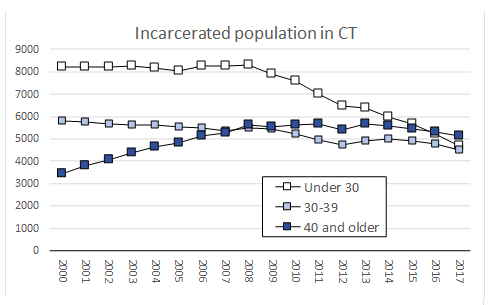 Based on the falling arrest rate of younger defendants, it is projected to fall further. As a percentage of the prison population, younger inmates have shrunk dramatically since 2008.

The Malloy administration had floated a plan to close Enfield and lay off hundreds in 2011, when unionized correction officers balked at concessions key to the administration’s closing an inherited one-year deficit of $3.6 billion. A new round of concessions this year were quickly accepted.

“The DOC’s decision to close Enfield Correctional is not surprising but gives us reason to be concerned from a broader policy standpoint,” said Collin Provost, the president of the AFSCME Local 391, which represents prison employees.“We are monitoring the situation to ensure that all aspects of the closure are handled properly, safely and in accordance with our collective bargaining agreement for all our staff.”

Enfield, which expanded with dormitories and other hard-to-secure living spaces, was the scene of a riot in the early 1990s, when gangs and overcrowding were blamed for disturbances at several prisons. The system largely has avoided major disturbances in recent decades.

In a study published in February 2015, the Brennan Center for Justice called the falling crime rate “one of the nation’s least understood recent phenomena.” Criminologists generally give some credit to the now-discredited boom in prison construction, but the consensus among the political left and right is that incarceration increases became counter-productive.

Malloy has said that the falling crime rate for the young is an indicator that the prison system will continue to shrink, allowing both budget savings and an expansion in programs geared to preparing inmates for release and reducing recidivism.