A reprieve from deportation in Connecticut, not politics 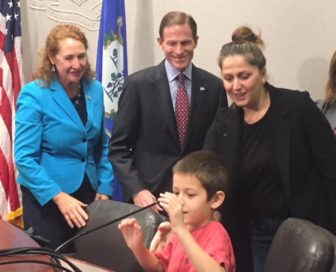 The legal, political and public-relations elements of fighting deportation orders were on stark display Monday at a press conference in Hartford where two members of Congress harshly criticized the Trump administration, an immigrant couple insisted they had no interest in politics, and a mischievous 7-year-old boy learned what it means to stay on message.

The news of the day was that Denada Rondos had won a reprieve of an order that would have placed her on a flight to Albania at 10:30 p.m. and ended her twin bids for asylum as a member of Orthodox Christian and ethnic Greek minorities fleeing a predominantly Muslim homeland and for legal residency as the wife of a U.S. citizen and mother of three American children.

Her bags were packed. She was ready to leave with her three young children, the oldest being 7-year-old Niko. All could stay, but Rondos and her husband, Viron, a successful restaurateur in Cheshire, decided against separating them from their mother.

“We had everything at the door,” she said.

Rondos, 32, arrived in the U.S. in 2002 as a 17-year-old sent overseas by parents fearing for her safety, said her lawyer, Erin O’Neil-Baker. She entered the U.S. illegally, using a passport belonging to someone else, then sought asylum, the start of a long fight for relief during the administrations of George W. Bush, Barack Obama and, now, Donald J. Trump.

Bush was president when she received an order of removal in 2007. It was not pursued during the Obama administration. But days after his inauguration, Trump signed a pair of executive orders on immigration enforcement, followed by new policies at the Department of Homeland Security that critics called a blueprint for mass deportations.

The most recent study of undocumented immigrants in the U.S. was in 2014, conducted by Pew Research Center. It estimated 11.1 million people were living here illegally, with two-thirds of them, like Denada, having been in the country for at least a decade.

The Department of Homeland Security’s Immigration and Customs Enforcement agents knew where to find Rondos. She was registered with ICE and kept the agency informed of her whereabouts as she tried to find a path to legal residency, a condition of her freedom while she fought the 2007 deportation order.

She worked doing the books for Viron Rondo Osteria, the popular restaurant opened and run by her husband in Cheshire, incidentally the home to U.S. Rep. Elizabeth Esty, D-5th District, and U.S. Sen. Chris Murphy. The business thrived, helped by Connecticut Magazine’s listing it as one of the state’s best restaurants. It is open seven days a week, 12 hours a day and employs 50.

The most recent stay of removal expired in September. She was scheduled for deportation Monday night, but her lawyer obtained an order Monday from the U.S. Court of Appeals allowing her to stay and keep pursuing a petition for residency based on her familial ties and asylum based on her fears of persecution.

Esty, Murphy and U.S. Sen. Richard Blumenthal had interceded on her behalf. Esty and Blumenthal held a press conference with the family and their lawyer.

Blumenthal said the court order is temporary, long enough to allow “her day in court.”

“She has an extraordinarily strong claim,” Blumenthal said. “This is not a tenuous claim or an attenuated claim. She has a powerful claim on the law.”

Baker said she has a motion pending with the Board of Immigration Appeals to reopen the removal order. She thanked the Department of Homeland Security for allow Denada to remain home while the case proceeds.

Esty said the new mission of ICE, broadening enforcement beyond undocumented immigrants with significant criminal records, makes no sense. Viron is a naturalized U.S. citizen of Greek descent, who’s succeeded in business and in life; separating his family is cruel, she said.

“This is not what a great country does,” Esty said.

Viron and Denada Rondos offered no criticism, just thanks to their Cheshire neighbors, their customers, their lawyer and the local and federal officials who have spoken out on their behalf.

“Thank you very much. I appreciate everyone. This is the best day of my life,” Denada said. “This is a great feeling. It’s a great feeling knowing that I will raise my children in a country of equality, where they are safe, they can have a future. That’s what any parent would like for their children. Thank you, from the bottom of my heart.”

Viron said his family was not political, just intent on staying together.

Their son, Niko, though, had a final thought.

Niko leaned into a microphone and said, “Donald Trump is —“

His ashen-faced father cut off his son, not waiting to hear how that sentence would end. The audience laughed.

Viron assured the audience that Niko was not going to offer any unpleasant opinions and that the family, indeed, was grateful.