Nancy Wyman says she won’t run for governor in 2018 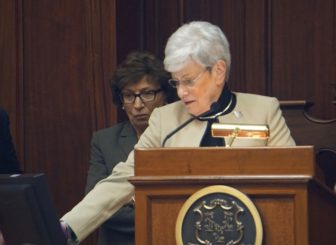 Lt. Gov. Nancy Wyman said Thursday she will not run for governor in 2018, ending months of personal contemplation and political calculation. Her decision deprives the Democratic Party of its highest-profile contender, while sparing it from a campaign that could have struggled to emerge from the shadow of an unpopular incumbent, Gov. Dannel P. Malloy.

Wyman, 71, is a popular figure among Democratic insiders and the winner of six statewide elections, four as comptroller and two as lieutenant governor. She said she finalized her decision Monday after months of talks with family and friends about the potential costs and benefits of trying to succeed Malloy as governor.

Her decision leaves Democrats with one declared candidate, Middletown Mayor Dan Drew, and four others who have raised significant funds through exploratory committees, but none has emerged as a front runner. With Wyman out of the race, Hartford Mayor Luke Bronin and former Secretary of the State Susan Bysiewicz are expected to take a look at running.

Bysiewicz, who badly lost a Democratic primary for U.S. Senate to Chris Murphy in 2012, already has raised $41,000 through an exploratory committee for what is expected to be a run for state Senate in a district that covers Meriden, Middlefield and much of Cheshire and Middletown. She said she was being encouraged to run for governor, but remains focused on the state Senate.

Wyman, whose style of politics leans toward conciliation, not confrontation, said the evolving nature of modern campaigning played a role in her decision. The routine savaging of candidates on social media takes a toll on families, one that she was uncomfortable seeing exacted on her husband, children and grandchildren. 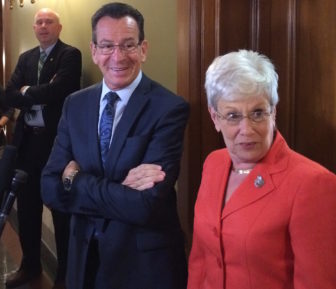 Had she run, Wyman said in an interview with CT Mirror, she believed she could establish an identity separate from Malloy, despite seven years of standing by his side and campaigning for him twice.

“I am appreciative to Dan for giving me this opportunity to serve as lieutenant governor, and I do think in the future people will look back at him and realize the good things he has done,” she said. “But I would stand up and say, ‘I’m going to show you we are two separate people. We agree on things, a lot of things. And we disagree on a lot of things, like being married to my husband of 51 years. I believe I could stand on my own record.

“Dan Malloy is not the reason I am not running.”

Malloy said Thursday he has regularly looked to his lieutenant for advice.

“I don’t think that there’s a governor-lieutenant governor in the country or in the history of the state of Connecticut that’s had a closer relationship. That doesn’t mean that we agree 100 percent of the time, but I have taken her counsel and she mine, time and time and time again,” he told reporters. “Love her, that’s what I would say. … I think she’s the greatest thing since sliced bread.”

Malloy, who is not seeking re-election of winning close races in 2010 and 2014, declined to say whether he gave Wyman advice about 2018.

“I think she would have been a spectacular candidate for governor, but people make their own personal decisions,” he said. “She decided she wanted to spend more time with her grandchildren.”

As the presiding officer of the state Senate, Wyman played a significant role in the Democrats maintaining control of the agenda in a chamber evenly divided among Democrats and Republicans since January. She cast a tie-breaking vote in July to ratify a concessions deal with state employees that is certain to be a campaign issue in 2018. 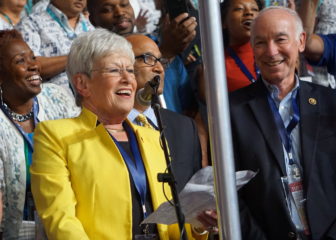 Democrats said the deal makes significant structural changes in the underfunded employee retirement system, while Republicans complained it did not go far enough and locked in benefits far too long, until 2027.

“I am confident that, with Nancy continuing to serve on the front line, we will build on the momentum we showed last Tuesday, activate a grassroots movement to spread the message that change starts at home, and win up and down the ballot next fall,” he said.

Wyman, whose voice still carries the inflections of an upbringing in Brooklyn, N.Y., entered politics running for the Board of Education in Tolland, then for the House of Representatives, where she became co-chair of the Education Committee. She was elected state comptroller in 1994, an office responsible for overseeing health and retirement benefits for 200,000 state employees and retirees, as well as providing a monthly and year-end analysis of state finances.

Malloy tried and failed to recruit her as a running mate in 2006, his first run for governor. Malloy lost a close Democratic primary. She agreed in 2010, giving the Stamford mayor a partner on good terms with a broad range of Democratic constituency groups and warm style of retail politics.

Since finalizing her decision Monday, Wyman said she had tried to avoid conversations with supporters who still were urging her to run. On Wednesday, she said, nuns at a fundraiser for the House of Bread soup kitchen in Hartford made a case for her candidacy.

Wyman said no one was going to change her mind.

“Not even nuns,” Wyman said. She laughed and added, “But even being Jewish, they got to me with Catholic guilt.”