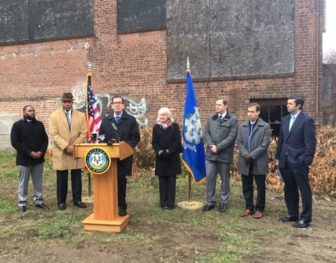 Officials say the newest round of funding will pay to remediate and revitalize 89 acres of blighted properties. Malloy said the investment will clean up neighborhoods, strengthen communities, and draw more economic activity to those locations.

Officials say the state has invested more than $220 million in brownfield redevelopment since 2012.

The governor made the announcement on Homestead Avenue in Hartford, beside two of the 16 properties in the project. Eight are slated for remediation now and eight more are being assessed for future work.

“Quite frankly it’s nearly impossible to attract corporate development to a site that has scars that this one does, and that’s why it’s so very important to have studied the problem, resolved how we could fix the problem and then undertake the actual cleanup,” Malloy said.

Tim Sullivan, the deputy commissioner of the Department of Economic and Community Development, said each project is different but the cleanup process usually takes several months.

Sullivan said officials are really interested in bringing private investment to the properties and noted many brownfields are clustered near transit, but it takes time and money to clean up toxic chemicals that have contaminated them.

“We talked to many developers, many investors who are excited about these sites because they see the power in this location,” Bronin said. “I’m excited about this because it lays the foundation that we will literally be able to build on in the future.”

The projects being remediated are:

The projects being assessed for future revitalization are: